Assam recorded the first case of death due to black fungus on Wednesday.

The Union Health Ministry has written to all the State Governments in the Country to make Mucormycosis, commonly known as black fungus, as a ‘notifiable’ disease.

As many as three states – Rajasthan, Telangana and Haryana – have already declared black fungus as an epidemic.

90 people have been killed due to black fungus in Maharashtra alone and the first death due to the infection has also been recorded in Assam.

In a letter to the States, Joint Secretary to the Union Health Ministry – Lav Agarwal said: “In recent times a new challenge in the form of a fungal infection namely MUCORMYCOSIS has emerged and is reported from many states amongst COVID 19 patients especially those on steroid therapy and deranged sugar control.”

“The treatment of treatment of this fungal infection requires multidisciplinary approach consisting of Eye surgeons, ENT specialist, General Surgeon, Neurosurgeon and Dental Maxillo facial surgeon etc and institution of Amphotericin B as an antifungal medicine,” the letter added.

“You (States) are requested to make mucormycosis an notifiable disease under Epidemic Diseases Act 187, wherein all Government and Private health facilities, medical colleges will follow guidelines for screening, diagnosis, management of mucormycosis, issued by MoHFW (GoI) and ICMR and make it mandatory for all these facilities to report all suspected and confirmed cases to Health Deppartment,” Lav Agarwal added in the letter to the States. 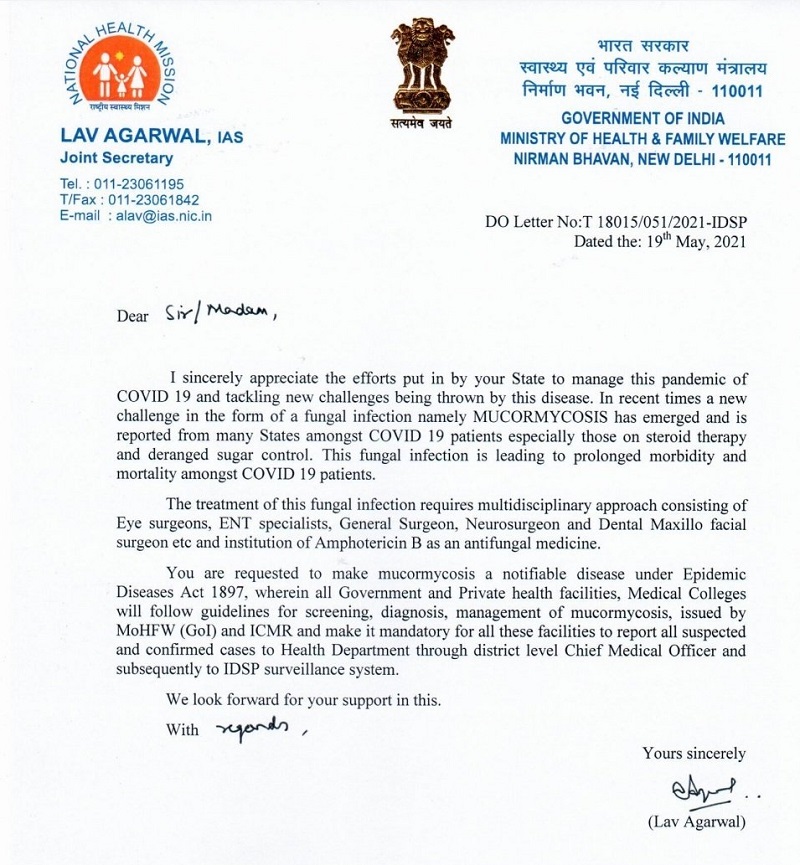 Black fungus cases are on a rise across the Country.

Mucormycosis, also known as black fungus, is caused by a group of mould called mucormycetes.

These fungi live in the environment, particularly in soil and in decaying organic matter, such as leaves, compost piles, or rotten wood, according to the Center for Disease Control and Prevention.

When someone breathes these fungal spores, they are likely to get the infection that commonly affects the sinuses or lungs.