Topcem Cement was also found to be making ‘false claims’ in its CSR spending, and converting a classroom into a toilet block 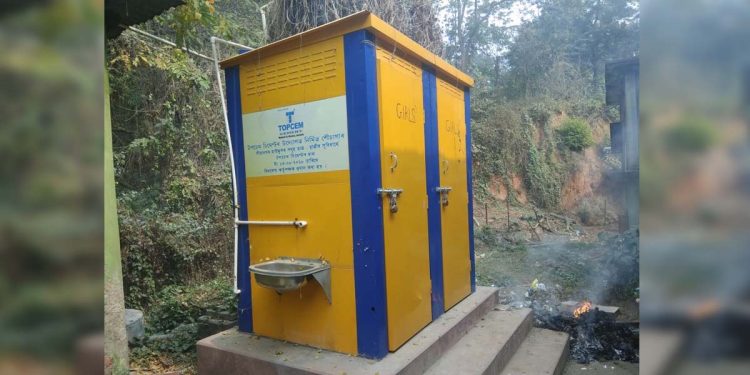 View of a toilet constructed by Topcem Cement under CSR.

Topcem Cement, an enterprise of the Lohia Group, headed by Kailash Chandra Lohia, has been found to be highly ‘irresponsible’ in implementing its Corporate Social Responsibility (CSR) initiatives.

As a CSR initiative, Topcem Cement on August 13, 2018, had gifted two toilets for the girl students of Geetanagar High School in Guwahati.

But, girl students at Geetanagar High School complained that they don’t get to use the toilets gifted by Topcem Cement because these are permanently locked.

While Northeast Now reporters visited the Geetanagar High School on Monday, it was found that both the toilets gifted by Topcem Cement were locked, and the girl students were forced to use an old unhygienic toilet.

Teachers at the Geetanagar High School said they could not let the girl students use the toilets gifted by Topcem Cement as the cement company did not bother to arrange for the water supply.

Despite repeated attempts, the teachers could not open the locks of the two toilets as the keys were taken away by the chowkidar of the school.

Surprisingly, while constructing the two toilets at the Geetanagar High School, the management of Topcem Cement did not bother to arrange water supply, or to make it accessible to girl students with disabilities.

Topcem Cement management was recently criticized for converting a classroom in the academic block in Arya Vidyapeeth Higher Secondary School into a toilet block.

“This cannot be tolerated. We are going to initiate actions against Topcem Cement for repeatedly denying rights to people with disabilities,” Nripen Malakar, General Secretary of Pratibandi Suraksha Sangstha, Assam, said.

It is surprising as to why Topcem Cement is repeatedly implementing its CSR initiatives, which are violations of the rights of persons with disabilities.

The Modi-led NDA government envisages equitable and inclusive access to sanitation facilities for persons with disabilities, as an integral aspect of their empowerment to lead a life with dignity.

And if anyone is found flouting the government guidelines, is punished under the Rights of Persons with Disabilities Act, 2016.

Arman Ali, a disability rights activist and executive director of the National Centre for Promotion of Employment of Disabled People, said be it schools, library, hospitals, or any public building, differently-abled individuals have the right to access toilet facilities.

“The Rights of Persons with Disability Act ensures all facilities are equally accessible to the differently-abled individuals,” Ali said, adding that the government and private organization should consider this while introducing any service for the public.

R.K. Pareek, president of Meghalaya Cements Ltd, the producer of Topcem Cement, on November 28, 2020, submitted a statement of expenditure incurred for socio-economic development under CSR activities.

The statement of expenditure of Topcem Cement’s CSR activities, which was submitted to the Additional Director-General of the Ministry of Environment, Forest and Climate Change in Shillong was for the period April 1 to September 30, 2020.

Interestingly, the statement of expenditure of Topcem Cement’s CSR initiative showed that the company spent Rs 5,81,591 for Polio Immunization camps between April 1 to September 30, 2020.

It is surprising as to why R.K. Pareek, the president of Topcem Cement claimed that Rs 5,81,591 was spent on organizing Polio Immunization camp amid lockdown due to the COVID19 pandemic.

During the lockdown, children below the age of 5 were not allowed to come out of their houses to check the spread of the killer viral disease. Moreover, there was no Polio Immunization camp during the lockdown period.

Dr. D. Sylla, the District Medical & Health Officer (DMHO) of East Jaintia hills district, when contacted, said there was no Polio Immunization camp in his district between April and September last year.

Probably, the management of Topcem Cement is not aware that CSR compliances is a serious issue, and the Ministry of Corporate Affairs, on a regular basis, is fine-tuning the rules.

Under Section 135 of the Companies Act, there is provision for penalty in the form of fine on the company and officers in default for failure in compliance with Corporate Social Responsibility (CSR).