While the Ministry of Corporate Affairs brought amendments to the CSR rules, Topcem Cement has been found making ‘phony claims’ in its CSR spending.

R.K. Pareek, president of Meghalaya Cements Ltd, the producer of Topcem Cement, on November 28, 2020, submitted a statement of expenditure incurred for socio-economic development under CSR activities.

The statement of expenditure of Topcem Cement’s CSR activities, which was submitted to the Additional Director-General of the Ministry of Environment, Forest and Climate Change in Shillong was for the period April 1 to September 30, 2020.

Interestingly, the statement of expenditure of Topcem Cement’s CSR initiative showed that the company spent Rs 5,81,591 for Polio Immunization camps between April 1 to September 30, 2020. 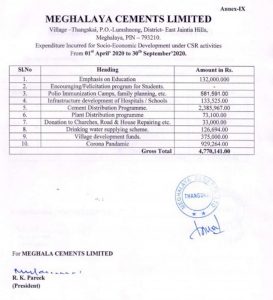 It is surprising as to why R.K. Pareek, the president of Topcem Cement claimed that Rs 5,81,591 was spent on organizing Polio Immunization camp amid lockdown due to the COVID19 pandemic.

During the lockdown, children below the age of 5 were not allowed to come out of their houses to check the spread of the killer viral disease. Moreover, there was no Polio Immunization camp during the lockdown period.

Dr. D. Sylla, the District Medical & Health Officer (DMHO) of East Jaintia hills district, when contacted, said there was no Polio Immunization camp in his district between April and September last year.

R.K. Pareek probably forgot that the District Magistrate, East Jaintia Hills district, during that period, had declared Topcem Cement as a ‘Micro Containment Zone’ to contain the spread of COVID19 in the area.

From midnight of August 9 to 6 am of August 13, 2020, in the interest and safety of public, unregulated entry and exit in Topcem Cement’s factory at Thangskai was totally prohibited.

The prohibitory order was issued in view of the detection of COVID19 cases in Topcem Cement’s complex at Thangskai, and it was also reported that the index case had breached the COVID19 quarantine protocol.

Under Section 135 of the Companies Act, there is provision for penalty in the form of fine on the company and officers in default for failure in compliance with Corporate Social Responsibility (CSR).