Faf Du Plessis stated that his entire focus will be on the shortest format of the game – T20.

Faf Du Plessis, who played 69 Tests for South Africa, announced his retirement from the longest format of the game on Wednesday.

The right-handed batsman captained his country in 36 Tests and scored 10 Test centuries for the Proteas.

The first of those hundreds came in a memorable debut against Australia at Adelaide Oval.

Curbing his naturally attacking instincts, he scored a gritty and unbeaten 110 off 376 deliveries to salvage a draw, allowing South Africa to seal a series victory in the following match.

He later became the only South Africa captain to lead his side to Test series victory over Australia both home and away.

Faf du Plessis has announced his retirement from Test cricket.

He played 69 Tests for South Africa scoring 4163 runs at 40.02, including 10 centuries. pic.twitter.com/QfhRjsWqxr 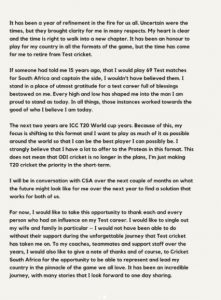 “It has been a year of refinement in the fire for us all,” du Plessis said in a statement posted on social media.

“Uncertain were the times, but they brought clarity for me in many respects. My heart is clear and the time is right to walk into a new chapter,” Du Plessis said.

“It has been an honour to play for my country in all the formats of the game, but the time has come for me to retire from Test cricket,” said Du Plessis.

Faf Du Plessis further stated that his entire focus will be on the shortest format of the game – T20.

“The next two years are ICC T20 World Cup years. Because of this, my focus is shifting to this format and I want to play as much of it as possible around the world so that I can be the best player I can possibly be,” Du Plessis added.

“To my coaches, teammates and support staff over the years, I would like to give a note of thanks and of course, to Cricket South Africa for the opportunity to represent and lead my country in the pinnacle of the game we all love. It has been an incredible journey, with many stories that I look forward to one day sharing,” Du Plessis said.

Also read: According to Tripura CM Biplab Deb, ‘Harvard University is in London’

Emergency in 1975 was a mistake, says Rahul Gandhi