Who is next PM of Bhutan: Lotay Tshering or Pema Gyamtsho

While Tshering is the prime ministerial candidate of DNT, Gyamtsho is fighting the polls under the banner of DPT 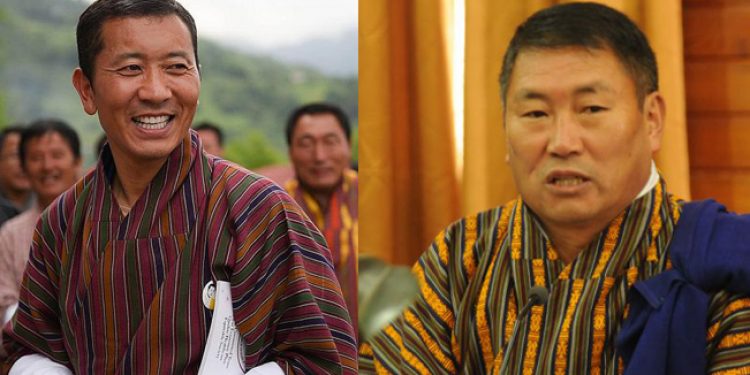 With just six days to go for the final round of general elections in Bhutan, speculations doing the round who the next Prime Minster of the Himalayan nation might be.

After the Druk Nyamrup Tshogpa (DNT) came first with 31.5% of the votes, followed closely by the Druk Phuensum Tshogpa (DPT) with 30.6% in the primary round of the National Assembly polls, focus has now fallen squarely on Dr Lotay Tshering and Pema Gyamtsho.

While Tshering is the prime ministerial candidate of DNT, Gyamtsho is fighting the polls under the banner of DPT for the most coveted post of the country.

According to Bhutan’s constitution, only two parties can participate in the final round of general elections.

The DNT headed by surgeon-turned-politician Tshering, which won the highest number of votes in the primary round on September 16, and the DPT led by Gyamtsho, which clinched second spot, will face off on October 18.

Tshering led DNT is a relatively new party which was formed in 2013 and came third in the elections that year but shocked political observers as well as leaders when it had secured the top position in the  primary round this year.

Tshering, an urologist, led the campaign with the theme of “narrowing” the wealth gap and tackling unemployment. He has also focused on development issues like healthcare facilities.

According to The Straits Times, these issues struck a chord with voters, especially in the rural areas.

The DNT received much exposure due to its performance at constituency-level debates and has risen to popularity with its focus on healthcare issues, reported Himal Southasian.

As leaders, however, both Tshering and Gyamtsho are capable of leading the picturesque Himalayan kingdom.

Although 50-year-old Tshering has taken charge of DNT only recently and relatively a new face in the political battle ground, he has already managed to garner considerable support from the voters in rural areas and is a household name in the country.

Tshering has at least 15 years of experience as medical practitioner.  A Druk Thuksey award recipient, Tshering in an interview to Kuensel said he joined politics out of sheer interest and passion. He said that his party wanted to see the gap between rich and poor closed.

“I’m physically in the hospital 15 to 16 hours conducting surgeries and treating patients, and at the same time thinking for the country,” he said. The surgeon said he does not receive money for his service from any agency.

An MBBS as well as a BCPS in general surgery from Dhaka University in Bangladesh, Tshering did his MBA from Canberra University.

Gyamtsho, 57, on the other hand, is a seasoned politician with around 10 years of experience in politics.

Born in 1961, Gyamtsho has been the Opposition Leader in the National Assembly and the second party president of DPT since 2013. He is the First Minister of Agriculture and Forest in the Democratic Government of Bhutan.

He had already found employment when he was 18-year-old. In 1990 he took M.Agr.Sc (Hons) from New Zealand, and in 1996 he took Ph D from ETH Zurich. He is also the recipient of the Lincoln Alumni International medal.

Gyamtsho was also Deputy Secretary of Policy Planning Division, Ministry of Agriculture. He has also worked with ICIMOD based in Kathmandu, Nepal as a specialist in watershed.

“Gyamtsho is a man of temperament and his calmness is commendable. Also he has a good team to form the government,” Business Bhutan quoted an unnamed parliamentarian as saying.

A former journalist, who does not wish to be named, told the newspaper that Gyamtsho stands ahead of Tshering as the latter does not have practical experience in the political field.

Whether veteran Pema Gyamtsho will be taking over Thimphu or political greenhorn Dr Lotay Tshering can script history—everything will be clear on October 18.