Normal life in Northeast likely to be hit on Jan 8

While influential NESO, has called for a 11-hour Northeast bandh against over Citizenship (Amendment) Bill, 2016, the AKRSU has called a 12-hour Assam bandh over ST status demand

Normal life in Assam as well as other states of Northeast is likely to come to a total halt on January 8 as North East Students Organisation (NESO) and AKRSU and Assam Chah Mazdoor Sangha (ACMS) separately called bandh on that day in support of their various demands.

While influential NESO, an amalgamation of main students’ bodies of all the seven Northeastern states, has called for a 11-hour Northeast bandh against Centre’s bid to pass controversial Citizenship (Amendment) Bill, 2016 in the parliament, the AKRSU has called a 12-hour Assam bandh over ST status demand.

The ACMS has called the Assam on that day demanding enhancement of wages of the tea garden workers.

Addressing a press conference here on Saturday, AASU chief adviser Samujjal Bhattacharyya said that the BJP government has forced them to declare bandh despite their reluctance.

“BJP government has snubbed the protests being carried out by the people of Assam against the Citizenship Bill and made an all out effort to pass it in the parliament. We will in no way accept it,” Bhattacharyya said.

The AASU and 30 ethnic organisations of Assam have called upon the people of Assam to make the bandh successful.

The bandh will remain effective from 5 am to 4 pm.

Bhattacharya said that the AASU and 30 organisations will observe black day on January 7, when JPC will submit its report in the parliament.

He further said that they will burn copies of the Bill across the state on that day as a mark of protests. 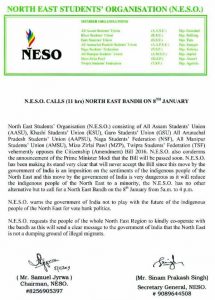 Meanwhile, AAPSU on Saturday announced that it would  support the 11-hour Northeast bandh on January 8 called by the North East Students’ Organization (NESO) against the Centre’s bid to pass the Citizenship (Amendment) Bill, 2016 in the Parliament.

AAPSU general secretary, Tobom Dai informed that the Union had already received a correspondence from NESO in regards to the bandh and an emergency meeting of all the executive members of AAPSU over the issue has been called on Sunday at 10 am in Itanagar.

“The NESO as well as the AAPSU have been making its stand very clear that we will never accept the Citizenship (Amendment) Bill since this move by the Government of India is an imposition on the sentiments of the indigenous people of the North East.

“ It is already clear that the Bill, if introduced, will bring only miseries to the indigenous people in the region. The AAPSU will support the bandh,” Dai said while adding that further information on the strike would be given out on Sunday after the meeting.