Over 3,000 British travellers, currently stranded in India, will be sent back home on 12 additional charter flights 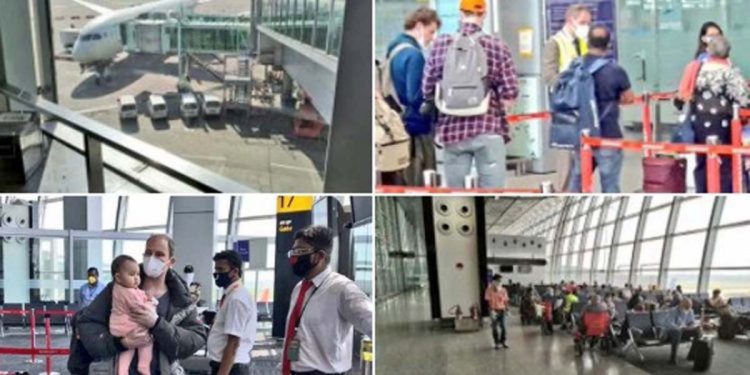 The United Kingdom (UK) has announced additional charter flights for the thousands of British travellers stranded in India due to lockdown in view of COVID19 pandemic.

Over 3,000 British travellers currently stranded in India will get home on 12 additional charter flights which have opened for bookings today, the British High Commission, New Delhi, said.

This follows the seven charter flights announced on April 5 from Goa, Mumbai and New Delhi (8-12 April) and will take the total number of people brought back on these 19 flights to around 5,000, added Hedley.

The first charter flight from India arrived at London Stanstead on Thursday morning with 317 British nationals on board from Goa.

UK Minister of State for South Asia and the Commonwealth, Lord (Tariq) Ahmad of Wimbledon said: “We are doing all we can to get thousands of British travellers in India home.”

“This is a huge and complex operation which also involves working with the Indian Government to enable people to move within India to get on these flights,” said Ahmad.

“Over 300 people arrived from Goa on Thursday morning, 1,400 more will arrive over the Easter weekend and these 12 flights next week will bring back thousands more,” Ahmad added.

“We are extremely grateful for the support we are receiving from the Government of India on this. Getting people home as quickly as possible remains our absolute priority,” Thompson further said.

Nick Low, British Deputy High Commissioner to Kolkata said: “I’m delighted that British Airways will operate a special UK charter flight from Kolkata to London (via Delhi) on Sunday 19 April.  We look forward to getting our people home.”

The following flights to London are scheduled for the next two weeks and British travellers should visit the India Travel Advice page to reserve seats as well as for any further information.

India is a priority country for the FCO to arrange charter flights from, with a large number of Britons seeking to return and a lack of commercial options – made more challenging by the size of the country and the restrictions on movement that are in place.

The UK Government is working with the airline industry and host governments across the world to help bring back British travellers to the UK as part of the plan announced by the Foreign Secretary Dominic Raab last week (March 30), the British High Commission, New Delhi stated.

It also said up to £75 million is available for special charter flights to priority countries, focused on helping the most vulnerable travellers.

“So far, flights have brought back British travellers from the Philippines, Ecuador, Bolivia, Nepal, Ghana, Tunisia, Algeria and Peru,” it further said.

The 21-day nationwide lockdown was announced in India by Prime Minister Narendra Modi from March 24 midnight as a preventive measure to contain the spread of COVID19.