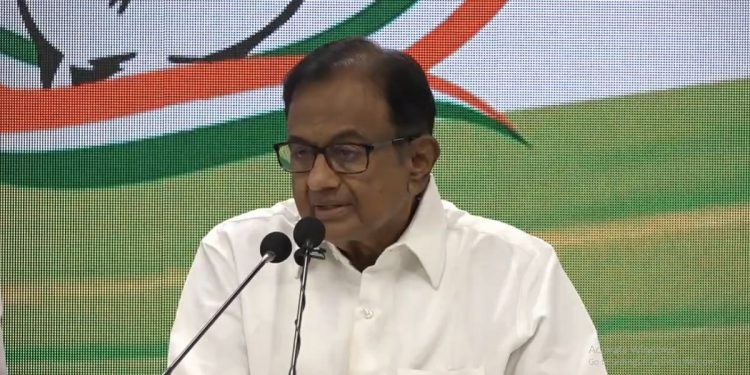 The Congress, on Tuesday, has slammed the Centre over sky-rocketing prices of petrol and diesel in the Country.

The Congress has demanded the Centre to immediately reduce the prices of petrol, diesel and LPG (cooking gas).

“Despite stout opposition, the government has continually increased the prices of petrol, diesel and LPG. Prices cannot be justified by the price of crude oil which is around USD 75 a barrel,” Chidambaram said.

“When crude oil price was 125 US Dollars, the UPA provided petrol at Rs 65 and diesel at Rs 44. The sole reason for the exorbitant prices is the levy of cesses by the government. Total cesses levied by the central government on petrol and diesel are Rs 33 and Rs32,” he said.

Briefing the media in New Delhi, veteran Congress leader P Chidambaram said that the BJP-led NDA government in the Centre is ‘faking’ its concern about price hike.

“The Congress party condemns the callous negligence of the Government on the issue of price hike,” veteran Congress leader P Chidambaram said.

Chidambaram said: “We demand that import duties be reviewed and reset prices of essential imported goods.”

The veteran Congress leader said: “Government has increased the import duties on a wide range of goods. Despite a downward trend in the value of the rupees, these increased duties remain. The result is higher prices on a large number of intermediary goods as well as essential goods.”

Chidambaram further said: “Through these cesses alone the central government collects approximately Rs 4.2 lakh crore every year and keeps all that money to itself. This is exploitation and greed of the worst kind.”

The Congress also demanded slashing of GST rates on a number of goods.

He added: “We also demand that GST rates be reduced on an array of goods that are mass-consumed by the people. We are convinced that these steps alone will bring relief to the people from the crushing burden of high inflation.”

“Government continues with multiple rates of GST as well as high rates of 12% or 18% on an array of items. GST is an indirect tax and by definition a regressive tax. High rates have the tendency to push up the prices of the final goods and services,” Chidambaram said.

The Congress also raised concern over high rate of unemployment in the country.

Congress leader P Chdambaram said: “The pandemic has resulted in jobs being axed, unemployment rising to 8.1% and incomes being cut. In such a situation of widespread distress, inflation has broken the back of the people. We hold Central government under PM Modi directly responsible.”