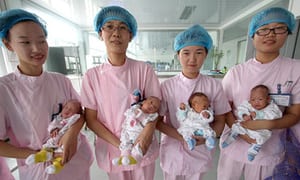 Chinese health authorities are studying the possibility of financial incentives to encourage child birth, local media reported, after decades of population controls left the country with a shrinking workforce, a Bloomberg report said.

China’s  National Health Commission has organized experts to explore using tax breaks and other benefits to reduce the cost of having children, the Paper, a Shanghai-based news portal, reported on Wednesday.

The study would assess the effects of rewarding families based on the number of children they have, the report said, without saying where it got the information.

The research is the latest sign that Chinese policy makers believe more dramatic action is needed to defuse a demographic time bomb almost three years after allowing all families to have two children instead of one.

Bloomberg News reported in May that China was planning to scrap all limits on the number of children a family can have to reduce the pace of ageing in the country and remove a source of international criticism.

The number of births in China fell 3.5 percent to 17.2 million nationwide last year, according to the Bureau of National Statistics. Many parents are concerned about the costs of raising additional children in a society accustomed to focusing family resources on one.

China’s graying society will have broad consequences for the nation and the world, weighing on President Xi Jinping’s effort to develop the economy, driving up pension and healthcare costs, and sending foreign companies further afield for labor.

The State Council last year projected that about one quarter of China’s population would be 60 or older by 2030, up from 13 percent in 2010.