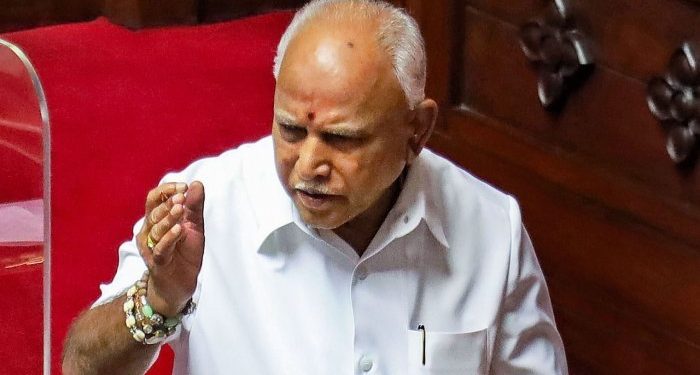 Even as Karnataka CM B.S. Yediyurappa insisted on Saturday morning that all is well, speculation is rife that he is likely to go.

As per reports, the BJP high command has sent a subtle but clear message to Yediyurappa in this regard.

Despite Yediyurappa being adamant on his stance to complete his tenure, BJP high command is insisting that he should make way for the new chief minister in the interest of the party, they said.

In view of the absence of a mass leader in the party and Yediyurappa’s stronghold on Lingayat votes, the BJP high command is treading cautiously in ensuring the smooth process of change of leadership in Karnataka.

The message that he should be resigning from the post has already been conveyed to Yediyurappa.

The party central leadership is offering plum posts to his sons — B.Y. Raghavendra, an MP and B.Y. Vijayendra at national and state levels, reports said.

Yediyurappa likely to resign by August and a new chief minister will take charge in Karnataka.

The negotiation with him has started and the process will take some time.

The BJP high command is in no hurry to replace him. It wants Lingayat support base to remain intact, sources say.

The names of cabinet ministers Basavaraj Bommai and Murugesh Nirani are doing the rounds for the post of chief minister.

The name of BJP MLA Aravinda Bellad is also on the list, sources added.