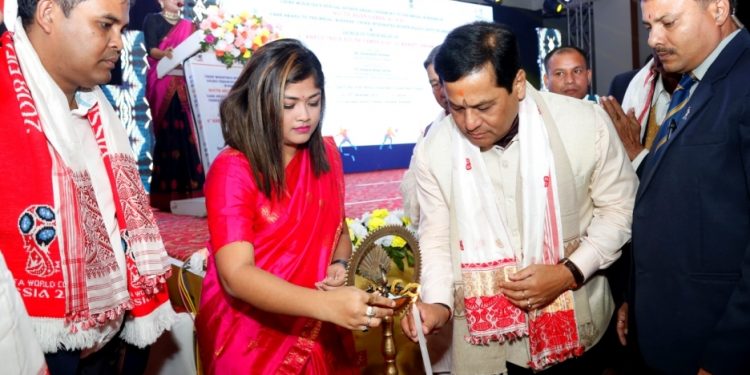 The torch will be carried to all district headquarters to elicit participation and cooperation of all sections of the people for the success of Khelo India Youth Games 2020 which will inaugurated in Guwahati on January 10.

He also presented cash incentives to the medal winners under Integrated Sports Policy of Government of Assam.

Sonowal also presented the cash awards to the medal winners of Assam in the 12th South Asian Games held in Guwahati in 2016.

Chief minister Sonowal announcing his government’s emphasis on sports said that his government is drawing a broad road map using Education, Culture and Sports as foundation stones for the development of human resources and growth of the state.

Sonowal said that a perfect balance among Education, Culture and Sports will be a force multiplier for the development of state and its human resources.

He also said that Education, Culture and Sports are the tools for individual and social empowerment.

Chief Minister Sonowal also said that sports have several facets and with utmost concentration and dedication, a sportsman can realise the inherent beauty of sports.

He also urged upon the 633 sportspersons from Assam participating in the 3rdKhelo India Youth Games 2020 to work hard and play to bring laurels to the state.

Chief minister at the same time appealed to the players from the state to be dedicated, disciplined and determined to be successful in the national and international sports events.

He also said Assam government is always with the sportspersons and their good performances in different competitions would encourage the government to announce more incentives for them.

Sonowal for a coherent and comprehensive development of sports in Assam has also announced Village Olympic Talent Hunt in six categories in the state.