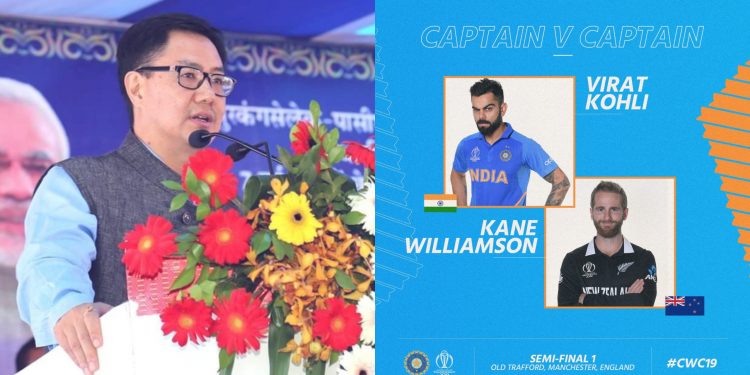 “Congratulations on reaching the semi-finals of 2019 ICC Cricket World Cup! Team India is nation’s pride and we are all celebrating your success,” Rijiju wrote on the letter.

Appreciating the effort of Team India, he said the whole nation is inspired by the performance of the team. He also appreciated the passion, skill, togetherness and sportsmanship which he said, “commendable throughout all the matches.”

The minister also expressed his sadness for not being able to be in the UK to witness the match live, but wished the best through the Acting President of Board of Control for Cricket in India, M. C. Khanna.

“A billion cheers galore as you go into play in the semi-finals, hoping that this success continues through to the final, and you bring home the World Cup,” he concluded the letter with regards.

The most awaited match is now being played at Old Trafford in Manchester.

The weather may interrupt the game. As per British Met official forecast cloudier skies and some showery rain developing at times likely to impede the match.

Earlier, a league stage match between India and New Zealand was withdrawn without toss due to rain in Nottingham.