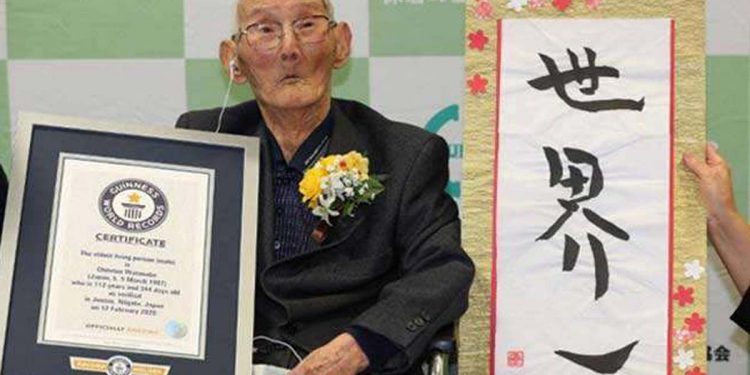 Chitetsu Watanabe from Japan, who was declared as the oldest man in the world at 112, breathed his last on Tuesday.

Watanabe passed away on Sunday night, just 11 days after receiving the Guinness World Record certificate, a media report quoted his family as saying.

It has been reported that Watanabe had received the official certificate from the Guinness Book of World Records on February 12 at a nursing home in Joetsu in Niigata prefecture.

A media report quoted the wife of his eldest son telling public broadcaster NHK that after receiving the certificate as the oldest man in the world, Watanabe began to experience a lack of appetite and respiratory problems.

Watanabe moved to Taiwan at the age of 20.

In Taiwan, he worked at a sugar refinery for 18 years.

After the end of World War II, Chitetsu Watanabe again came back to Japan.

Watanabe told the Guinness team that he was a fan of calligraphy, custard, and ice cream.

He also told the Guinness Book of World Records team that laughter was the key to his long life.

Watanabe, who was married with five children, said the secret to longevity is to “not get angry and keep a smile on your face”.

He admitted a penchant for sweets such as custard pudding – but it appears to have done him no harm.

Watanabe was recognized as the oldest man in the world following the deaths of German Gustav Gerneth in October 2019 at the age of 114 years and Japan’s Masazo Nonaka in January last at the age of 113.

Now the big question is – who is the oldest man in the world after the death of Japan’s Chitetsu Watanabe.

It may be mentioned that the oldest woman in the world – who is also a Japanese – has turned 117 years old.