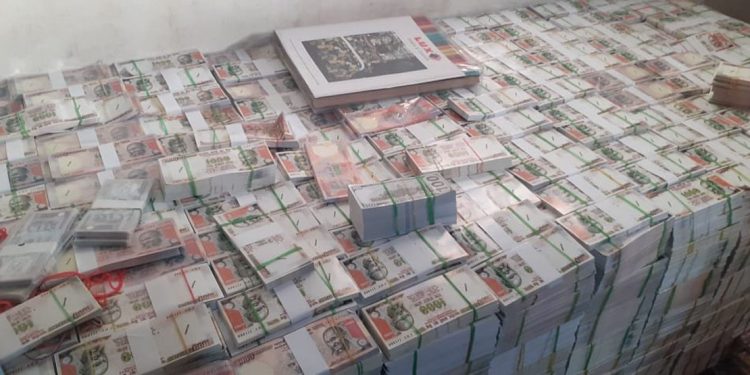 An Army jawan along with 5 others have been arrested following the seizure of a huge stash of fake currency notes of the total face value of Rs 87 cr in Pune.

The operation was carried out jointly by the Military Intelligence and Pune City police.

The arrested Army jawan of Lance Naik rank, attached to an Army unit in Pune, has been identified as Shaikh Alim Gulab Khan.

According to a report, the stash of fake currency notes was recovered in a bungalow at Viman Nagar during an operation carried out on Wednesday afternoon.

It has been suspected that the arrested jawan and the 5 civilians are part of a huge racket of exchanging fake notes for real ones during currency exchange transactions.

The modus operandi, as the investigators believe, was to accept genuine notes and give stacks of notes in return.

The joint operation was conducted by the Southern Command Liaison Unit (SCLU) of Military Intelligence (MI) and teams from the Crime Branch of Pune City Police, the report said.

The DCP of Crime Branch, Bachchan Singh, was directed by Pune Joint Commissioner of Police Ravindra Shisve to carry out an operation against the racketeers after receiving leads from the Military Intelligence.

A decoy team including Military Intelligence and police officials contacted the racketeers to set up an exchange of notes.

The decoy deal led to a raid that unearthed huge stacks of fake currency notes.

The team also recovered fake US dollars, genuine Indian notes, and US dollars worth nearly Rs 3 lakh along with a fake air gun, some forged documents, spy cameras, electronic devices, and cell phones.

As per the preliminary estimate, the face value of the fake currency in Indian rupees was around Rs 87 crore, the report added.

Apart from the army jawan, the five others who were arrested by police, have been identified as Sunil Sarda, Ritesh Ratnaakar, Tuhaul Ahmed Ishaq Khan, Abdul Gani Khan, and Abdul Rehman.