Particular attention should be given to the increase of bird/wildlife activities as a result of reduced air traffic: DGCA

The DGCA on Monday asked all its airport operators not to ease their wildlife control measures even at a time when airports have seen a significant reduction in operations due to the nationwide lockdown.

“Many regular activities such as grass cutting, bird activity monitoring patrols, and dispersal measures may be limited given the current situation of reduced manpower and lower aircraft movements at airfields,” the DGCA said in its circular.

“This may result in an increase of bird/wildlife that forage, feed and rest or even nest within or near aerodromes,” the circular issued by DGCA deputy director general D.C. Sharma.

The regulator on Monday said as per its rules, an airport operator must take action to decrease the risk to aircraft operations by adopting measures to minimize the likelihood of collisions between wildlife and aircraft.

“Therefore, airport operators are advised not to ease bird/wildlife control measures and bird/wildlife monitoring be continued,” the circular stated.

“Particular attention should be given to the increase of bird/wildlife activities as a result of reduced air traffic,” it said.

The rapid spread and deadly effect of COVID19 has had a drastic effect on the airport operations, the regulator said in its circular. 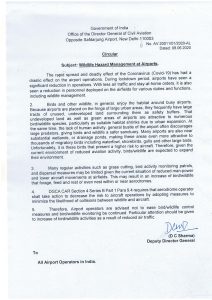 “During the lockdown period, airports have seen a significant reduction in operations,” it said.

With less air traffic and stay-at-home orders, it has also seen a reduction in personnel deployed on the airfields for various duties and functions, including wildlife management, the regulator added.

Many airports are near substantial wetlands, or drainage ponds, making these areas attractive to thousands of migratory birds including waterfowl, shorebirds, gulls and other large birds, the DGCA noted.

“Unfortunately, it is these birds that present a higher risk to aircraft. Therefore, given the current environment of reduced aviation activity, birds/wildlife are expected to expand their environment,” it said.