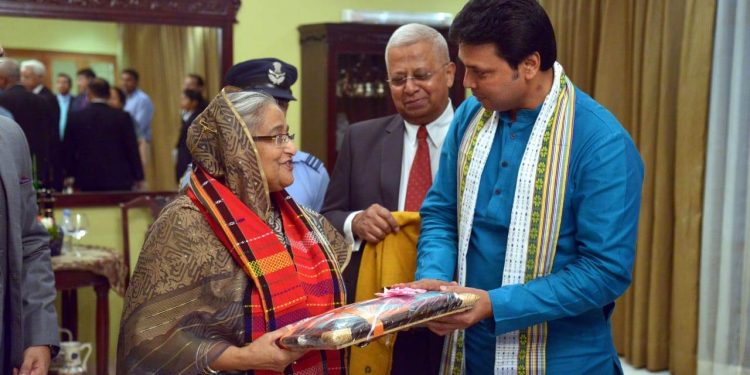 You may fault Tripura CM Biplab Deb on scores of issues but the continuity he has provided in Bangladesh outreach is surely a huge boost to PM Narendra Modi’s foreign policy.

Like his predecessor CPI-M’s Manik Sarkar, from whom he admits he has much to learn, Biplab Deb has maintained the best of relations with the Sheikh Hasina’s government.

That became evident when Deb promptly responded to Hasina’s gift of haribhanga mangoes with a return gift of 100kgs of Tripura’s famous Kew pineapples.

From the outset, Deb has been very friendly with Hasina, her party leaders and ministers. So much so that Bangladesh commerce minister Tipu Munshi once told a trade conference in Guwahati that “Biplab Deb’s body is in India but heart is in Bangladesh.”

Even when Home Minister berated Bangladesh as the country producing hungry migrants and called them termites and Assam CM Himanta Biswa Sarma followed suit to suggest India need to take up repatriation of NRC excluded with Bangladesh, Biplab Deb steadfastly put his foot down on demands for NRC in Tripura and had only good things to say about Bangladesh.

That is because he knows the Bangladesh of today from his visits to his ancestral Chandpur and interaction with relatives who still stay there. Unlike Suvendu Adhikari who discovered a mini-Pakistan in the same Muslim localities of Nandigram where he had been guarded by lieutenants like Abu Sufian and Abu Taher against left goons during the land agitation, Deb remained firm in extending a hand of friendship to Apa (Baidew) Hasina and avoiding anti-Muslim or anti-Bangladesh remarks.

A grateful Hasina has cleared all Tripura related connectivity projects, even the water supply scheme from Feni river, that would soon make Tripura the gateway to rest of Northeast for Indian mainland. Tripura will also be Northeast’s gateway to India and the sea.

BJP would do well to follow Biplab Deb’s lead in reaching out to Bangladesh. Indian high commissioner Vikram Doraiswami sought to use Tripura’s emotional connect to Bangladesh when he entered the country on foot through the Akhaura checkpost and took the same route to Dhaka taken by the Indian army in the 1971 war to liberate Bangladesh.

In a foreword for my book “Agartala Doctrine”, then foreign minister Dipu Moni had described Agartala as the ‘ war capital of the Bangali nation’. Hasina and her countrymen remember nostalgically Bangabandhu’s secret visit to Agartala in 1962 and Tripura’s sheltering of 18 lakh Bangladeshis in 1971 (when its population was 15.56 lakhs). Thousands of Bangladeshi freedom fighters visit the 1971 Muktijoddha camps every year as sort of pilgrimage.

And why should Deb and his tiny state not leverage this unique connection with Bangladesh, billed as Asia’s next big economic bull! This far-off state’s is intricately linked to Bangladesh’s rising prosperity. Spot the big shopping Bangladeshis in Agartala’s business districts or those boarding flights to the rest of Indian cities and you will know why Deb is doing the opposite of what his party colleagues do — he is even seeking to extend the Agartala airport into Bangladesh in a win-win game.

The airport has limited runaway space being right on the border and tens of thousands of Bangladeshis use it to fly cheap into Indian cities. That means huge spin offs for hotels, hospitals, retail shopping malls (which Bangladeshis frequent on their way back) and transport sectors.

Bangladesh jumped four notches to become India’s fifth-largest export destination in the year ended 31 March as exports to many of the nation’s traditional markets shrank because of the pandemic while its eastern neighbour continued to report economic growth.

Exports to Bangladesh grew 11% in the previous fiscal year even as India’s overall exports contracted 7% because of the pandemic, according to government data.

Bangladesh has experienced an unprecedented economic transformation over the past decade and is set to surpass India in terms of per capita income.

India’s exports to most of its key destinations contracted as the coronavirus pandemic disrupted supply chains. Among the country’s top 20 export destinations, shipments grew only to China (27.5%), Indonesia (21.7%) and Brazil (7%), apart from Bangladesh.

Bangladeshis are now the single largest tourist segment in India, accounting for more than 20 percent of the foreign tourists visiting India every year. Since most of them are medical tourists or come for bulk shopping, they spend much more than hash-smoking white skins.

Tripura’s and Northeast’s future lies in its neighbourhood. If some are determined not to leverage trans-border connections and only demonise Bangladesh, it is their choice. Deb and his state will do what suits its interests — friendship with Bangladesh is not a luxury but a dire necessity for this former princely state. By doing that, Deb is providing a huge boost to Modi’s ‘neighborhood first ‘ foreign policy.