NRC attackers on the prowl: Vanquish them with peace 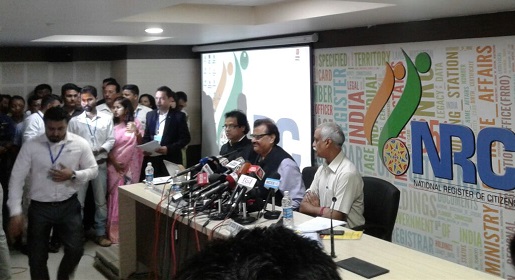 Two weeks have gone by since the final draft NRC has been published. From day one of the publication, the people have witnessed some dirty political springs spewing venom all around in their sinister design to derail the NRC update process. Nay, the nasty opposition to the NRC has not remained confined to the boundaries of Assam. Wild uproars against the NRC have rocked Delhi and Kolkata, to name just a few.

In some neighbouring States, infiltration check posts, set up by some local bodies, have sprung up overnight post NRC draft publication in Assam with a view to foiling any possible attempt by those whose names have been left out of the draft NRC from entering those States.

Meanwhile, the people of Assam, who are much better versed in respect of the menace of foreigners in the State than anybody else in India, have proved to the world that they trust in peace and that a problem as huge as determining genuine Indians and foreigners can be solved through the medium of peace.

However, the attackers are up in arms against the NRC. The reason is as clear as daylight. With the 2019 Lok Sabha polls as well as polls to some State Assemblies round the corner, several political parties are on the lookout to mint maximum political capital out of the NRC issue. Whereas over 40 lakh names have failed to find place in the final draft NRC, several parties are pounding upon the issue as a political goldmine. Having gone totally berserk, some parties are even making wild projections that over 40 lakh people have been stripped of their citizenship.

These adversaries of the NRC are ignorant of the fact that in the backdrop of the menace of foreigners in the State, the people of Assam fully cooperated with the NRC update process. It is the people of the State that took part in millions in the 6-year long historic Assam Movement demanding detection, deletion of names from the electoral rolls and deportation (3 Ds) of foreigners (mainly Bangladeshis, both Hindus and Muslims) from Assam.

The movement culminated with the signing of the Assam Accord in 1985, accepting midnight of March 24, 1971 as the cut off date to determine foreigners. Further, under a tripartite deal, that also involved the Centre and the State Government, the authorities agreed to update the NRC of 1951. What followed was a fiasco by Dispur under the style of NRC updating pilot project in 2010 at two locations, Barpeta being one of them.

Within 24 hours Barpeta was on fire and the project was shelved ‘temporarily’ in the language of Dispur. Finally the matter reached the Supreme Court. It was only when the apex court cracked the whip that towards the middle of 2015 the NRC update process began in the right earnest. The result being that under the supervision of the Supreme Court the final draft NRC saw the light of the day on July 30, 2018.

The problem with a host of political heavyweights across the country as well as some national media houses is that they have no idea whatsoever about the long history, beginning with the Assam Movement laced with the 3Ds, till the final draft NRC was published. Among the attackers, many seemingly have a political axe to grind.

The tirade let loose against the NRC by West Bengal Chief Minister Mamata Banerjee clearly shows that she is totally ignorant of the ground reality and is fully committed to mint political gains out of the issue. Ludicrously enough, for some parties and top brass making wild comments against the NRC has become a political fashion. This political fashion has mounted to such an extent that even an organization in the US has started crying foul against the NRC.

The NRC attackers may be told that the people of Assam know what is what and whom to trust. The adversaries to the NRC must be an astonished lot that despite all provocations, there is absolute peace in Assam. And why not? It is with the full cooperation of the people and under the supervision of the Supreme Court that the NRC update process has progressed so far. Further the Sankar-Azan mantra of peace, patience, tolerance and communal harmony runs deep among the people. Further, the residents of the State know that the NRC updating process has not reached the end of the road and that the process of ‘claim and objection’ is on the anvil.

It is common observation that a good number of genuine Indians failed to find place in the final draft NRC possibly due to errors made in the application forms and/or submission of documents. In a country like India where proper literacy is extremely low, and the teeming millions, particularly those in the countryside, have virtually nothing to do with paper works, commission of such errors is almost natural. In the present situation, it is the avowed duty of the political parties and organizations to step in and render the needful guidance to the left out people, with lots among them believed to be genuine Indians, to make their claim in the appropriate manner for entry of their names in the final NRC.

As of now, the general feeling in the conscious circle is that, given the necessary guidance in making their claims, a large section of the left out people will find their way into the final NRC. Having said that, with midnight of March 24, 1971 as the cut off date to determine foreigners, and with Assam being bombarded by unabated influx (mainly Bangladeshis), in all probability a huge number of names would not find place in the final NRC. In fact the demand to update the NRC arose with a view to determining foreigners who entered Assam post midnight March 24, 1971.

Once the final NRC is published, besides determination of genuine Indians, the process of detection of foreigners would also be completed. That in turn would mean a partial fulfilment of the 3Ds demand of the historic Assam Movement. So far as the next course of action is concerned, the people are confident that appropriate directive(s) would emanate from the Supreme Court.

Recently, when the Supreme Court pulled up NRC State Coordinator Prateek Hajela, Justice Nariman reportedly told the former, “Don’t forget you are an officer of the court.” The Bench further said, “Whatever you say, it reflects on us.”

The submission of Standard Operating Procedure (SOP) by the Centre before the apex court further establishes the authority exercised by the court over the NRC update process.

Be that as it may, with the elections round the corner, the NRC attackers are likely to add a lot more ammunition to their armoury in their tirade over the issue in the next few months. However, one is confident that, armed with peace, the people of the State will be able to foil every sinister design of the enemies of the NRC.