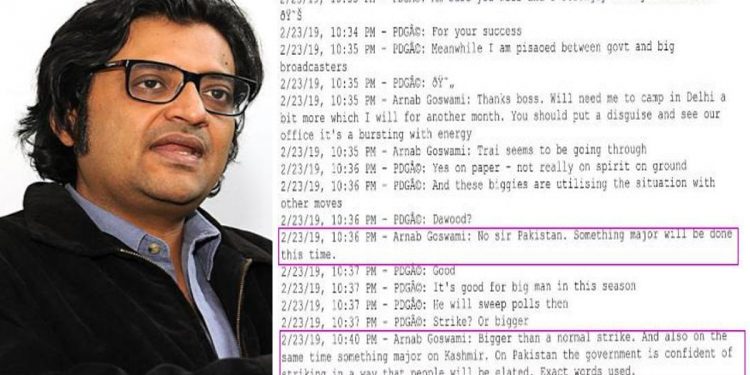 Going by various reports that have hit the headlines since sometime now, Republic TV and its Editor-in-Chief appear to be on slippery grounds.

What is more exciting is the fact that the media is on pins and needles in the matter with the expose of some long WhatsApp chats that Arnab Goswami allegedly had with former BARC CEO Partho Dasgupta.

Some startling revelations come to the fore, post leak of the WhatsApp conversations.

The purported WhatsApp chats between Goswami and Dasgupta, which are a part of the 500-page charge-sheet submitted by Mumbai police in the court, reveal blatant misuse of official position by the former BARC CEO to help his ‘friend’ Arnab Goswami as far as TRP rigging is concerned.

Reports also allege that Arnab ‘tutored’ Dasgupta on the lines of argument to be made in the Court, that may be helpful to his channel.

Some reports have also alleged that the chats even reveal how the duo even tried to influence the judiciary.

It may be recalled that earlier in 2010, the Radia Tapes scandal exposed the power nexus between corporate houses, Delhi-based journalists and politicians.

It now appears, that nothing has changed since the Radia Tapes incident; on the contrary the advertising sector on which the media depends has grown multiple-fold and has presently jumped to the Rs 630 billion mark from Rs 129.6 billion in 2004.

With scams and galloping corruption in astronomical figures having become the order of the day in India, it is just natural that that money in billions that make way into the media sector, would attract mega scamsters.

With the government, political heavyweights, bureaucratic big wigs, mighty-mouthed so called journalists who have thrown all ethics, morality and honesty and basic human values to the dogs in their greed for wealth, power (even political power) and contacts in high places, the emerging rat-race to be at the top in the TRP ratings at any cost in sheer violation of all norms, including legal and journalistic, it is just natural for a section of the media and some unscrupulous money minters in the garb of journalist to blacken the media into an unethical business sector.

With the Mumbai Police charge-sheet already in public domain and many more allegations are making the rounds in both the print and the broadcasting media, any conscious observer may be of the view that all such charges and allegations may not be well founded.

However, one may be on safe grounds, in the context of the WhatsApp chats that have seen the light of the day, that the alleged misdoings may have sufficient substance.

The WhatsApp conversations between Republic TV Editor-in-Chief Arnab Goswami and Partho Dasgupta has brought to the fore evidence of alleged collusion to influence TV ratings to the benefit of Republic TV.

Media is also agog that the chats, held between the Pulwama terror attack and India’s retaliatory strike inside Pakistan, reveal that three days prior to the Balakot airstrike, Goswami purportedly knew that a strike against Pakistan was imminent.

In his language, the strike would cause the people to be ‘elated’.

The big question that arises here is – as to how Arnab Goswami could embark on something of such great national importance and secrecy in the corridors of power – the Balakot strike, three days ahead of the D-Day.

Is it not a breach of national security with Arnab at the centre?

One may also ask as to how many hands such sensitive information might have rolled over during those three days.

Further, if some big media houses or bosses can have access to vital information on national or internal security, does New Delhi have the means or apparatus to stop such strategic data from crossing the border and falling in the hands of India’s enemy?

What is the central government doing?

Is the government even mulling to launch a thorough probe into what is now referred to as Arnab Chat Gate?

Significantly, referring to the Balakot airstrike, a media report has asked, “And was this the strategic purpose of the military operation? Did India sacrifice a plane, a helicopter, and lives of at least six men and the capture of a pilot by Pakistan for a political purpose?”

Again, attacking Republic TV and Arnab Goswami, another report stated, the WhatsApp chats “tell us how Arnab Goswami risked India’s national security by revealing information of abrogation of Article 370, 3 days prior to the government announcement.”

While a thorough discussion on the subject would involve volumes, it may suffice if it be stated that the most condemnable and despicable factor in TV journalism is that some so called journalist in their race to be on the top every Thursday, can go to any lengths – even ‘compromising’ national security .

Meanwhile, with the ‘Arnab Chat Gate’ has opened up a Pandora’s box with expose conversations coming to light with every passing day, all nationalist Indians are watching with bated breath as to  what action New Delhi initiates against those who have breached national security.