Notwithstanding our intense feeling of patriotism, this needs no reiteration that one of the greatest contributing factors in instilling our positive passion and craze for the ball games like football, cricket etc among sports lovers across the country  has been the two hundred years of British Rule.

Time was when there was a popular saying in English, “Cricket for the kings, tennis for the prince, football is for the loafers and rugby for the buggars.”

Needless to say that the saying was made more in jest and does not have any semblance of reality at any given time in the history of man’s quest for recreation and entertainment.

Empirical experiences reveal that while cricket and tennis are definitely popular games, football stands out as the most popular game among the connoisseurs of sports cutting across all differences, the world over.

While cricket, like other parts of the country, had been basically a middle or upper middle class game in this part of the country as well,  football or soccer has been the most popular game with its enormous number of  followers across the length and breadth of our State. The sight of congregation of huge football followers of Shilling in particular or Meghalaya in general at Nehru Stadium, Guwahati, till the early 80s, coming down to watch good football matches is very familiar to the sports lovers of yester years.

Bordoloi Trophy, being head and shoulder above all such tournaments in terms of prestige and ranking, generated tremendous amount of enthusiasm – almost like the annual auspicious festivals – and the football lovers used to wait with bated breath for the tournament to commence to whet their appetite to watch quality football.

Till the early 60s, Bordoloi Trophy was confined to competition basically among the local teams in which the friendly but intense rivalry between Gauhati Town Club and Maharana A C club used to draw the crowd in numbers. With the increase in popularity and stature of the Bordoloi Trophy, the flood gates were opened for outstation teams and the then giants of Kolkatta – Mohon Bagaan, East Bengal and Mohammedan Sporting – became the regular participants which definitely gave a new dimension to the tournament.

While the big names of Kolkata football teams were attraction for the admirers, Assam Police Football Club was emerging as a strong contender and fierce fighter with their never-say-die attitude and with the beginning of the decade of 70s, it became the heart-throb of the football lovers of Assam on the strength of its superlative performance.

Mention must be made of the names of Chandra Mohan Gonju, Bijay Nath, Subir Choudhury,  Salil Marak and Kalimuddin, the great daring goalkeeper, to name a few only, whose names are still remembered  for their great display of spirited performance. However, the man who won the heart of every one was Gilbertson Sangma. 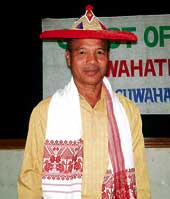 Sangma had all the ingredients of a modern footballer – skill, speed and stamina.  I vividly remember that in 1971 the Assam Police football team was playing the final of Bordoloi trophy tournament against Mohammedan Sporting. Backed by a strong 40,000 approximated crowd, Assam Police football team displayed scintillating football from the beginning itself and had caught the Calcutta giant on the wrong food on a number of occasions.

Towards the dying moments of the game, Gilbertson, out witting two Mohammedan Sporting defenders by his deft dribbling,   had rushed towards the penalty region and then foxed the goalkeeper with a left footed flick to score the solitary winning gold amidst thunderous applause of the crowd.

The star-studded Mohammedan Sporting team was stunned and shocked. When the referee had whistled finally, not only the crowd present at Nehru stadium went berserk but also there was jubilation in the entire State.

During the seventies, Gilbert Sangma was the darling of the crowd. A striker, he had great speed, ball controlling ability and uncanny capacity to score goals. The Hindustan Times, a daily published from New Delhi and other metros termed him as a man with ‘golden boot’ following his scintillating performance against Han Yang University, Korea, in 1976.  Sangma played for Assam Police which was immensely popular during late 60s to early 80s.  Gilbertson played for the country as well. Even today, sports lovers nostalgically remember the golden days of Assam Police football team and the performance and skill of Gilbertson Sangma.

From the point of view of records, Mohan Bagan team had won the prestigious tournament five times, a record still not achieved by any other team.

In the mid seventies, Bangkok Port Authority Club, took part in the tournament adding to the intensity of competition. The Port Authority had won the trophy thrice so far. It is worth mentioning that the growing popularity of the tournament coupled with the traditional hospitality extended to foreign teams and knowledgeable crowd support may be the governing reasons which had attracted teams from Russia, Uzbekistaan, Iran, Nepal and even Bangladesh (Abahani) to participate in the tournament.  Esteghal, the Iranian club, had won the trophy in 1989.

The mind boggling technological advancement made by our country especially in the last three decades along with growing popularity of visual media has resulted in making television an inseparable part of our day to day existence.

The viewers now have the privilege of watching top class football games sitting in their drawing rooms and as a natural consequence, their interest in Indian football has diminished considerably.

Gone are the days when sports lovers from far off places like Barpeta, Tezpur or  Sivasagar,  to name  a few, used  to come to Guwahati to watch Bordoloi Trophy matches.  However, the memories of glorious moments of Bordoloi Trophy are priceless for the older generation.

With the breath taking Sarusajai football stadium and its spectacular ambience receiving international accolades, the sight of long queue to watch Bordoloi Trophy matches before Nehru stadium has become a thing of the past and relegated into the pages of history.

Ganguly is a retired ACS officer and sports enthusiast. He can be reached at [email protected].

Assam: Man from Sivasagar killed in road mishap at Dibrugarh