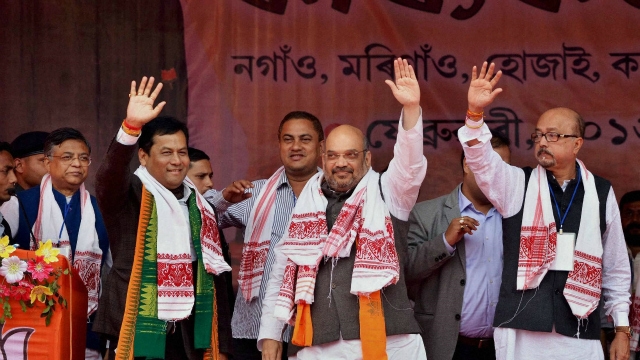 Political parties in Assam—both the ruling as well as the opposition besides the newly-floated regional parties–have targeted the students and unemployed youths of the state to win the Assembly polls 2021.

While ruling BJP has announced various freebies to lure the youngsters, opposition parties have also promised a number of schemes to woo the young voters.

The ruling parties always have the advantage in announcing attractive schemes or implement the same before elections.

To draw the attention of the voters, the ruling parties also keep announcements of some attractive schemes pending and announce them just ahead of the elections.

Keeping in view of the Assam Assembly polls 2021 with a target of winning 100+ seats out of the total of 126 Assembly seats, the BJP-led Sarbananda Sonowal government has recently announced several development schemes.

Apart from the other schemes, the BJP has started working on ways to attract young voters, mainly students.

The BJP-led government in Assam started distributing scooties to the girl students of the state, who passed the HSLC examination 2020 in the first division.

Assam education minister Himanta Biswa Sarma announced that the girl students, who cleared the HSLC examinations in 2018 and 2019, would also be distributed scooties.

Sarma, who is also the North East Democratic Alliance (NEDA) convenor, recently announced that the government would provide Rs 100 per day to each of the students for attending classes.

Minister Sarma recently announced that the students, who stay in college hostels, would be provided Rs 700 each up to 10 months with effect from February 2021.

Through these announcements, the BJP is undoubtedly trying to prevent the students from extending support towards the AASU-AJYCP-backed Asom Jatiya Parishad (AJP) and Raijor Dal.

In the previous elections, the BJP-AGP alliance had faced no problem from the All Assam Students’ Union (AASU), which is the largest students’ body in Assam.

But after the formation of a new political party, Asom Jatiya Parishad (AJP), backed by the AASU, the BJP’s hope of easy sailing in the Assembly polls 2021 has received a roadblock.

The BJP is in more trouble after the AJP, led by the face of anti-Citizenship Amendment Act (CAA) campaign, Lurin Jyoti Gogoi, has joined hands with Raijor Dal, led by RTI activist and Krishak Mukti Sangram Samiti (KMSS) leader Akhil Gogoi (who is still in jail).

AASU-AJYCP-KMSS played a major role in giving a shape of mass agitation to the anti-CAA campaign.

While the KMSS under the leadership of its leader Akhil Gogoi was able to bring the people of Upper Assam including those belonging to the farmer community, AASU and AJYCP along with its allied students and youth bodies could organise huge gathering against the CAB/CAA across the state.

After the formation of two new regional political parties – Raijor Dal and Asom Jatiya Parishad – and their decision to get united to throw out the BJP-led government from power in Assam, the saffron party has felt that the ground is not remaining the same for them as it was in 2016 Assembly elections and during 2019 Lok Sabha elections.

The main strength of the Asom Jatiya Parishad (AJP), backed by the AASU-AJYCP, is the students’ power which is well known to the ruling BJP.

So, the BJP is making all-out efforts to break the attachment of the students towards the leaders who once led them.

But the big question is whether the students, aged above 18 years who have voting rights, would cast their vote for the ruling party, which has provided incentives to them or to the leaders, who are promising a state where the voice of the people of the state will remain on the top.

Former AASU general secretary Lurin Jyoti Gogoi-led Asom Jatiya Parishad is also not lagging behind in announcing incentives to the students and unemployed youths, who are struggling to get settled in life.

The money will be paid to them under the ‘Universal Basic Income’ model. The money will help the employed youth in preparing themselves for getting employment and to give relief to their families.

This promise is likely to attract thousands of unemployed youths, who are struggling to get employed.

The BJP has failed to fulfil its earlier poll promise of providing employment to crores of the employed youths in the state.

AJP, which has shared pamphlets of their poll promise through social media platforms, says: Our aim is not to make the unemployed youths inactive but to encourage towards the field of work.”

The newly-formed regional party says: “This is not our promise, but a responsibility.”

Assam Pradesh Congress Committee (APCC) president Ripun Bora recently promised that they would provide jobs to each of the families in the state if they are voted to power.

In view of the tough challenge, it is likely to face in the ensuing Assembly polls, mainly in Upper Assam, where the Raijor Dal and AJP have a stronghold, the BJP is currently busy increasing support base in Upper Assam.

It will be interesting to see the fight among BJP-led NDA, Grand Alliance and Raijor Dal-AJP in the ensuing Assam Assembly polls.