When any election approaches, the ruling dispensation always enjoys a good deal of advantage 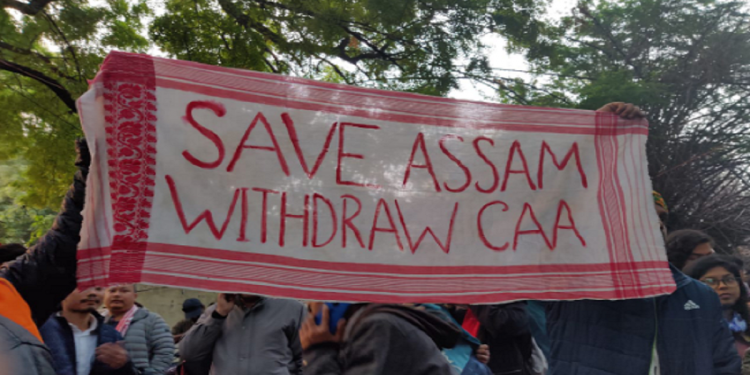 In the run-up to the 2016 Assam Assembly elections, the BJP had promised to bring about sweeping ‘pro-people’ PARIVARTAN  in the realm of the political, social and cultural sphere as well as to totally revamp the administrative set-up in Assam to be on the ‘fast-track’ and be totally free of corruption.

Some of those root-and-branch changes initiated by the saffron party have become easily visible in the public domain. For instance rechristening of some of the major thoroughfares of Guwahati as Mahapurush Sankardeva Road or Mahapurush Madhabdeva Road and the like was no means achievement.

Similarly, a profound and immensely far-reaching change has been witnessed in Dispur with the Assam Secretariat, being renamed as Janata Bhawan paper wise in the interest of the teeming millions’. From that standpoint, it may be highly pertinent at this juncture to note that with the State Secretariat having seemingly turned into the ‘greenest ever pasture’ for the people, as indicated by the name and on paper, one may opine that the rechristination process certainly fits in with the roof-top thunder emitted by Dispur, ‘zero tolerance towards corruption’, scam or no scam. Great changes indeed.

In any case, now it is election time – the 2021 Assam Assembly polls are round the corner.  With various parties having already launched their poll campaign, the air is already beginning to be polluted with treacherously cankering sounds of wild political discordance. While there may not be anything new about the emerging turbulent political milieu, huge PARIVARTAN is noticeably underway with accelerating momentum.

During the Congress era, the path was paved for distribution of weaver’s thread and blankets among so-called beneficiaries, selected without any norms or guidelines by the then ruling party members, prior to the coming into force of the election code of conduct. Organised under various government schemes and funded from the state coffer, the brand of pre-poll game-plan for votes under the previous regime came to be known in local parlance as ‘suta-kombol rajniti’.

Indeed that was, to a significant extent, old-fashioned and at times a hit-and-miss variety of politics. But these are smarter times. Everything has gone smart. Now we have smart cities, smart villages, smart floods, smart ‘gunda tax’, smart syndicates, smart bank frauds, smart bank loan waiver to so-called industrialists & frontline loan defaulters, smart scams, smart slapping of criminal charges like sedition, the war against the state and Maoist links on peaceful protesters and others at the drop of the hat and the list goes on and on.

Now that the Assembly election is not far away in Assam, smart exercises by the political parties, mainly the ruling BJP that has made India so smart, are already on. The loud talks by the BJP on PARIVARTAN over the years and in the light of the ‘monumental transformations’ achieved as noted at the outset, it is befitting that BJP’s run-up to the polls should be smartly marked by such smart exercises that fully justifies the ruling party’s ethos of smart PARIVARTAN.

Throwing suta-kombol rajniti to the dogs, the Dispur embarked upon transparent distribution of hard currency notes among people under a host of newly framed government schemes. So much so that students are also being paid hard cash for attending classes, may be a first-time phenomenon the world has witnessed. Further, thousands of scooters are reportedly on the cards for students.

The question also obviously arises if, with the hard cash factor attached, the education precinct would ascend heaven-wards or nosedive headlong to the bottomless pit for a rock-shattering crash?  As the Assembly election draws nearer the amounts paid to the so-called beneficiaries are also being enhanced. One feels this enhancement process may continue at regular intervals till the poll dates are announced.

Benefits may not be in cash alone. These may be in terms of the offer of the land ‘patta’, offer of vehicles for the business of public transport, reduction in the rate of electricity tariff & relief for consumers, cuts in the price of diesel and petrol.

Further, a foundation stone laying spree by the ruling party is already underway. Interestingly, the Prime Minister has also joined the spree. Obviously, one may estimate that till the Election Commissioner officially announces the Assam polls, a hundred foundation stones would be laid.

An observer, without an iota of doubt, feels that many more schemes worth tens of thousands of crores for hard cash distribution among ‘beneficiaries’ could very much be up the sleeves of the Centre and Dispur till the election code of conduct comes into force in Assam.

When any election approaches, the ruling dispensation always enjoys a good deal of advantage. However, on this occasion, the BJP appears to be taking extreme advantage of the election landscape mosaicked with loop-holes, courtesy of a toothless Election Commission.

It may be noted that since the departure of no–compromise former Chief Election Commissioner TN Seshan, the autonomy status of the Commission has vastly eroded and today it has been virtually reduced to that of any Central government department.  It is deeds, and not flowery rhetoric, that project the real status and colour of any authority, constitutional or extra-constitutional. The strong and sharp teeth implanted by Seshan are now gone, making the Commission unable to bite, so to speak.

With the opposition parties at a disadvantage in this respect, particularly when the ruling party opens up the state coffer at least in a denotative sense, for hard cash to flow out in astronomical figures for implementation of the newly announced vote-catching schemes in the guise of empowerment, lest the same fail to work effectively as vote-capturing machines, the opposition, in contrast, is left with the only alternative of making promises before the electorate.

Interestingly, over the years, all parties, including those in the opposition & the ruling dispensation, have been duping the people with tall promises only to be forgotten immediately. Gone are days when promises are to taken by the ‘aam aadmi’ to have any credibility. That being the bleak scenario for the opposition, it must bank on the burning issues plaguing the body politic of the state like the devastating annual floods and erosion in the state.

Millions lose almost everything, including hearth and home, reduced to paupers and make the roadsides their permanent home. The economic landscape is as good as a non-ending vista of burgeoning unemployment and loss of jobs, more conspicuously since the obnoxious demonetization by the Centre, sky-rocketing of prices, outright robbery of the forest wealth, virtually entire official machinery rotting in corruption, ‘mati & bheti’ for tens of millions of Hindu Bangladeshis, demand by certain quarters to reduce Assamese to a second language in the state, the vast demographic disfigurement and devastation to be caused by CAA and a non-ending list of smoldering issues plaguing the state.

Again, in the face of BJP’s money power, including the massive flow of cash from the state exchequer under the guise of government schemes, one may not be quite sure as to how many of the opposition leaders would not be lured by the tempting bait to be laid by the BJP.

That raises the question as to how united and strong a challenge the opposition could pose. On this count, it would be interesting to watch if the two newly formed regional parties – the Asom Jatiya Parishad (AJP) and Raijor Dal- that have already entered into a poll tie-up can not only confront the BJP juggernaut with unsettling dauntness and gusto but take on the challenge with resilience, determination and mental fortitude to carry the battle to the rival camp.

It is only the emergence of such a scenario at the end of the poll hullabaloo that the identity of the indigenous people of Assam can be protected to some extent while a host of even greater challenges lie ahead if the greater Assamese society comprising all the indigenous communities of the state is not to disintegrate into a lost tribe in the decades to come. Finally, will that be the ultimate PARIVARTAN much vaunted by the BJP?