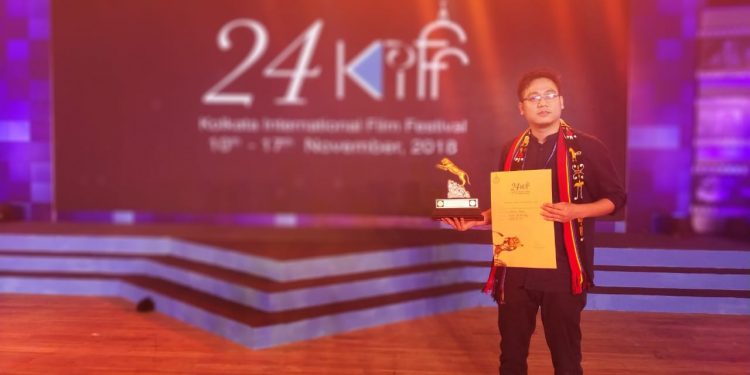 The 30-minute film called ‘Look At The Sky’ was written and directed by Ashok Veilou of Purul village, about 140 km north east of Imphal in Senapati district.

The film from Manipur competed with 11 other films, including Shaqyo Dey’s ‘Head’ and Gaurav Madan’s ‘Sambavtaha’ (Probably) for the highest paid film award for a short film competition in the world.

The award carries a citation, a memento of Golden Royal Bengal Tiger and cash prize of Rs five lakhs.

The film narrates about a man outcast by his village for not supporting the village candidate in the election. He shows courage and fights for his right.

The film features Ngoale Hepunii of Koide village also under Senapati district in the lead role.

It is the second time that Ashok has won award at KIFF. His ‘Tou-Tai’ (Seed) had won the Golden Royal Bengal Tiger for best Short Film in KIFF 2016.

The 27-year-old director who recently completed his three years PG in Direction and Screenplay Writing from the prestigious National Film School of Satyajit Ray Film and Television Institute, Kolkata,couldn’t be contacted for his comment.

He is the son of Thaipei Peter of Purul village. According to family sources, Ashok is a very simple and down to earth person and continues to focus on his studies until the better result comes.

Even the film which got award in the Kolkata festival was written and produced as a practical work during his PG course with shooting equipment and crew from outside the State.

But the 26-minute film which tells the tale of the ponies of Manipur of today, could not get the award.

Pousheru Ngade also from Purul village, edited both the films of the two brothers.

Alexander who is presently serving as the Film Facilitation Officer (Eastern Region) under the Ministry of Information and Broadcasting, Government of India speaking to Northeast Now over phone from Kolkata on Sunday said that convincing village elders who hardly knew cinemas besides bringing all equipments and crew from other parts of the country in a small village for making a film was not an easy task.

“It’s an awesome feeling when your work is recognized,” feels Alexander who is also alumni of Satyajit Ray Film and Television Institute, Kolkata.