Writer of Assamese book on Maoists held, released after questioning

This is an attempt by this fascist government to muzzle the dissenting voices of the people, says activist Soneswar Narah

Barely one week after the Parliament approved an amendment to the anti-terror law, police on Wednesday night nabbed a writer of an Assamese book on Maoist rebellion, from Dergaon in Upper Assam’s Golaghat district.

Biju Bori, who authored a book on Maoism, titled, Maobadi Sangramor Itihash Aru Anyany (History of Maoist Movement and other Essays) in 2015, was apprehended after police seized a copy of the book from the possession of a lady teacher.

The teacher, identified as Chayanika Kaman from Golaghat, was arrested on Tuesday for her alleged nexus with ULFA (I) militants.

Police, however, let him off in the pre-dawn on Thursday after interrogation at Golaghat SP office but seized his mobile phone.

Police have not returned his seized mobile phone till the time of filing this report.

Bori, an employee of the state education department, said there is nothing objectionable in the book.

“There is no objectionable content in the book. I have not written anything in support of Maoists nor against the Nation,” Bori said.

He said the articles included in the book were published in Assamese daily newspapers during 2010-11 and no one had objected to it since then.

“I have failed to understand why suddenly I was picked up and questioned regarding the book. I have, in fact, written against the armed struggle in the book,” Bori added. 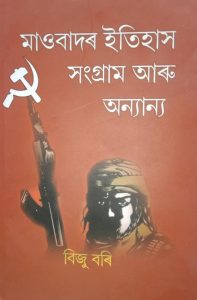 He further said that he is not familiar with the two other persons– Kiran Sharma and Amlan Hazarika—who were arrested along with him on charges of having links with ULFA (I) militants.

A team of Dibrugarh police on Wednesday had arrested Sharma and Hazarika from Dergaon before picking up Bori.

The incident has sparked massive outrage on social media. Several Facebook users have slammed the Dibrugarh police for their ‘atrocious act’.

Locals led by activist Soneswar Narah staged a protest at Dergaon police station against the ‘fascist act of the government.’

“This is an attempt by this fascist government to muzzle the dissenting voices of the people,” said Narah.

The Unlawful Activities Prevention Amendment (UAPA) Bill, 2019 seeks to arm the government with power to proscribe not just organisations but also individuals as terrorists, if they are allegedly “found committing, preparing for, promoting or involved in an act of terror”.

The government would be authorised to brand any person terrorist merely on the basis of speech or being in possession of literature the authorities deem “promoting” terrorism.

Narah said that the, UAPA Bill, 2019, which was passed in Parliament by the BJP government recently, enable the security forces to send a person behind the bars branding as terrorist for writing anything against the government.

Earlier on Tuesday, Dibrugarh police had arrested four persons including a school teacher, a hospital staffer and two others for their alleged nexus with ULFA (I) militants.

They were identified as Chayanika Kaman, Kabita Kaman, Kanak Pegu and Debajyoti Dowarah.

(With input from Avik Chakraborty from Dibrugarh)