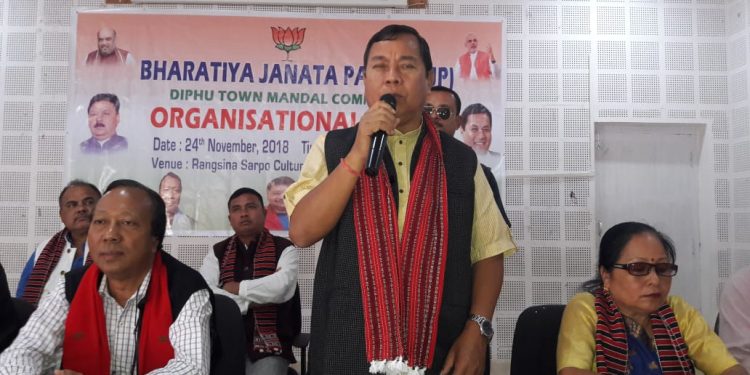 Assam HAD Minister, Sum Ronghang on Saturday stressed on the candidates’ capacity to win on their own in the coming town committee election in the twin districts of Karbi Anglong.

He was speaking at the organisational meet held at Rangsina Auditorium at Diphu in Karbi Anglong on Saturday. He also said that the nominated Members of Autonomous Council (MACs) will be announced in this month.

The BJP’s Diphu Town Mandal Committee meeting with the minister focused on pinpointing potential candidates for Diphu Town Committee elections, although official notification for the same is yet to be made.

Ronghang said, “One thing the ticket aspirants need to keep in mind is that whether he or she gets party ticket or not, but they should continue to be loyal to the party principle and remain in the party. You should not be disheartened for not getting a ticket, but as party workers you should continue to work for the party.

The concerned district party president, concerned EMs or MACs falling under their constituency and local MLA will vet the candidates.

CEM of KAAC will be concentrating on Diphu as it is the district headquarter.”

Asking party workers to get ready for the Town Committee election he informed that the party will provide a fund of Rs.10,000 by each person of the candidate. The minister said four nominated MACs will take their oath before end of November. The minister did not mention the names.