Congress candidate Wanglat will demand amendment to the provisions of State of Arunachal Pradesh Act, 1986 if elected 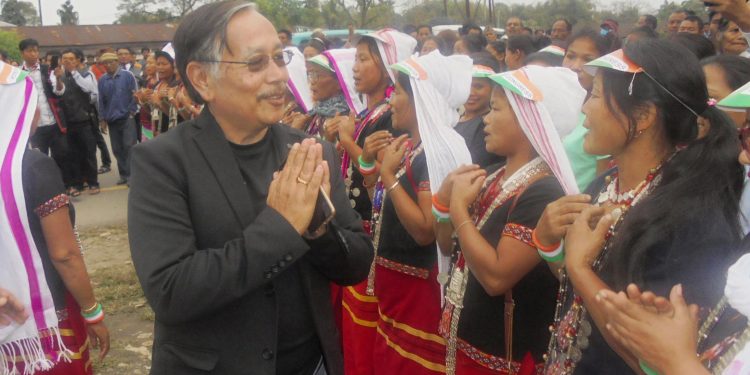 Congress candidate for Arunachal East Lok Sabha seat, James Lowangcha Wanglat said he would oppose NDA government’s move to introduce Citizenship (Amendment) Bill, 2016 and demand for amendment of the provisions of State of Arunachal Pradesh Act, 1986 for protection of land right of the indigenous people.

Wanglat claimed that the BJP top brasses being afraid of his political and strength, are busy in pushing a number of star campaigners including national party president Amit Sah, Assam chief minister Sarbananda Sonowal and others to Eastern Arunachal to mobilise the people against him thereby spending crores of rupees in the name of poll campaign.

“The BJP leaders are trying to suppress the voice of the people of northeastern region. It is trying hard to prevent victory of Congress candidates fearing that the Congress MPs would oppose their anti-people policies like Citizenship Amendment Bill, 2016,” said Wanglat adding that BJP is adopting unfair means to win the election.

Wanglat, a former Arunachal Pradesh minister said the Citizenship (Amendment) Bill, 2016 proposed by Narendra Modi-led NDA government was extremely detrimental for the indigenous people of the northeastern region and it might ruin the age-old unity and integrity among ethnic communities.

The Bill was formulated to give citizenship to foreign nationals in India for creating religious polarisation, he said.

Stating about the State of Arunachal Pradesh Act, 1986, Wanglat said the Act is devoid of land right of the indigenous people.

He said the Act was enforced under Section 378 of Constitution of India, wherein land right and intellectual property right for indigenous people were not preserved.

Assuring that he would strongly take up the problems of northeastern states with Central government, Wanglat appealed to the citizens to support and elect Congress candidates both to Assembly and Lok Sabha.

Reacting on the recent incident of the seizure of huge amount of money from BJP leader’s vehicle at Pasighat, Wanglat said the saffron party is playing “dirty game to buy vote with money” thereby disgracing the democratic system of the country.