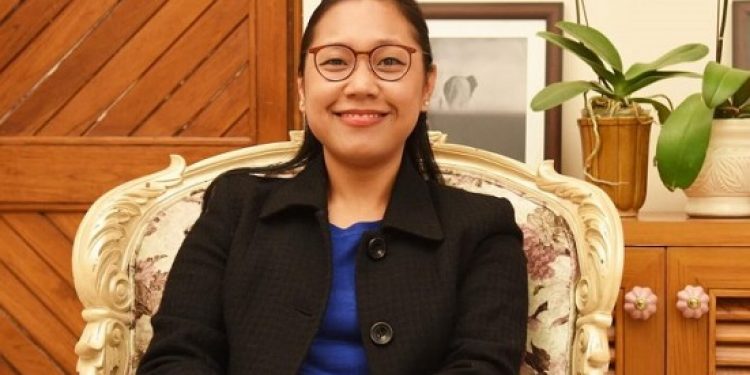 Agatha K. Sangma, the youngest candidate from the northeast to be elected to the 17th Lok Sabha, definitely deserves a berth in Modi 2.0 government.

Born on July 24, 1980, Agatha is smart, educated, articulate and people-friendly.

She got her degree in law from Pune University and joined the bar in Delhi High Court. Later, she did her Masters in Environmental Management at the University of Nottingham in the UK.

In addition to her political legacy, education and smartness, she is the second MP elected from NDA (apart from Kiren Rijiju of BJP) in the northeast to have the experience of working as a minister in the union government.

This is the third time Agatha has become a member of the Lok Sabha. In May 2008, she was first elected to the 14th Lok Sabha in a by-election, after her father P.A. Sangma resigned from the seat to return to state politics in Meghalaya.

She was again elected to the 15th Lok Sabha as a Nationalist Congress Party MP, and was the youngest Minister of State (29 years) in the UPA 2 government led by Manmohan Singh.

As the minister of state for Rural Development, Agatha had given top-most priority to the villages of northeast so that the areas could see some light of development.

Unfortunately, some of Agatha’s dreams to develop northeast remained unfulfilled because she had to resign as a minister of state from UPA 2 government in October 2012 due to changes in political equations.

The young MP from Tura has the experience of working as a member of the Meghalaya Legislative Assembly as well. She contested as an NPP candidate from the prestigious South Tura constituency in 2018 and registered victory.

She was the chief whip of NPP in the Meghalaya assembly. But, Agatha had to vacate the seat for her brother, Conrad K. Sangma to contest the by-poll from her constituency.

While the young MP from Tura has blessings of her two politician brothers – James and Conrad, she always draws inspirations from her father to work for the people.

NPP Chief Conrad K. Sangma has already extended unanimous support to Narendra Modi as the Prime Minister. Will Modi pick Agatha in his new team to bring about development in the northeast?