Walkathon in Dimapur to celebrate one year of Ayushman Bharat scheme

Altogether 30,344 beneficiaries have availed the scheme amounting to over Rs 1.75 crore in Dimapur district 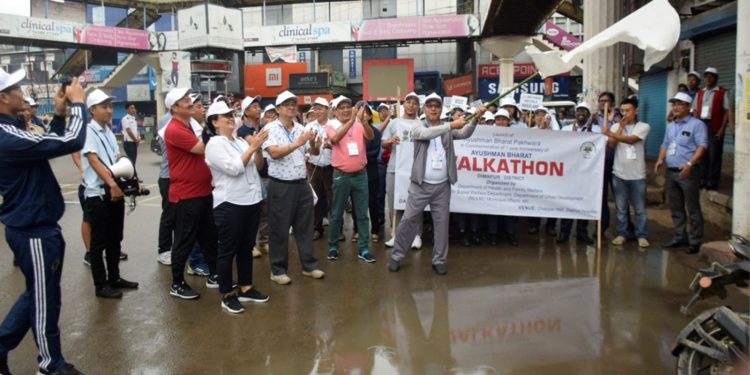 A walkathon was organised from Holy Cross School Junction to Dimapur District Hospital in Nagaland on Monday to celebrate one year of the Ayushman Bharat scheme.

The walkathon was organised by the Nagaland health and family welfare department in association with the departments of social welfare, urban development and municipal affairs.

Minister for health and family welfare Pangyu Phom flagged off the walkathon.

Speaking on the occasion at Dimapur District Hospital, the minister said the Ayushman Pradhan Mantel Jan Arogya Yojna (ABPMJAY) was launched on September 23 last year to prevent impoverishment due to pocket expense on hospitalisation.

The yojna is also aimed at promoting access to quality health care for the poor and vulnerable section of the society.

In order to take the health services close to the needy people, Phom said the department has extended hospital empanelment up to primary health centres.

He said 63 hospitals comprising 59 public and four private hospitals have been empanelled so far and many people have benefited.

Minister Phom also said in order to ensure satisfaction of the beneficiaries and for prompt and effective management of any grievances, grievance redressal mechanisms have been put in place in the state, district and empanelled hospitals.

On the attempts to enrol ineligible persons and malpractice by hospitals, the minister said adequate measures are being taken up to prevent such fraudulent activities by leveraging technologies and site physical verifications.

He cautioned that stern action will be taken against any fraudsters even to the extent of filing case against them.

Dimapur deputy commissioner Kevekha Kevin Zehol asked the doctors and nurses to re-dedicate themselves to the service of the patients.

He said the district administration has earmarked some amount from local area development project for the improvement of the mortuary in the district hospital.

Deputy chief medical officer Dr Antoly Suu said under the scheme a beneficiary having the e-card can avail upto Rs 5 lakh per year and can have treatment in all empanelled hospitals in the country.

He said the beneficiaries were selected based on the social economic caste census 2011.

She said altogether 30,344 beneficiaries have availed the scheme amounting to over Rs 1.75 crore in Dimapur district.