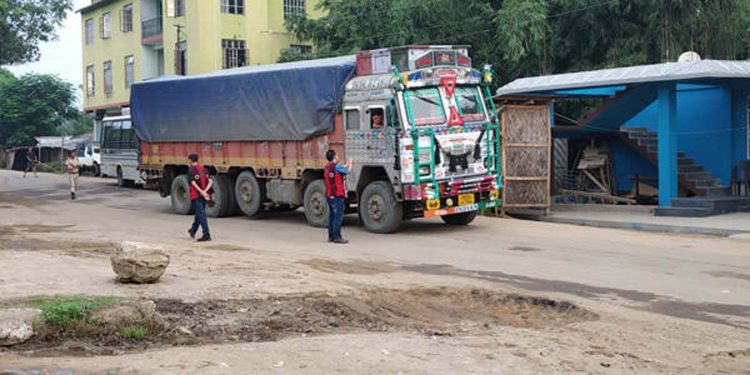 PAC members asking the driver of a truck over illegal collection of money at Dillai gate in Nagaland. Image credit – NP

The Public Action Committee (PAC) of Naga Council Dimapur demanded abolition of the lease system introduced by the Dimapur Municipal Council (DMC) from next month.

It attributed the lease system in the municipal body as the main cause of price escalation and unregulated price of commodities in Dimapur.

The PAC has been spearheading the movement against illegal collection of money from trucks entering Dimapur.

Sources said the PAC office-bearers recently held a joint meeting with the Dimapur deputy commissioner and commissioner of police seeking ways to streamline the “price mechanism” and control the price of essential commodities in the district.

The committee also issued a representation to the Dimapur DC demanding that the administrative head of the district take the reins and regulate prices of commodities.

The committee said according to a DMC official the council controls and regulates certain items enlisted to them while remaining commodities such as cement and rod are under the control of the district administration.

The committee also claimed they found many organisations engaged in illegal collection of money.

“All these unions and organisations should not be allowed to collect illegal money and licenses of such unions should be cancelled,” it said.

The PAC requested the DC, as the administrative head of the district, to immediately revive the district price regulation committee with members from the department concerned along with two PAC members to bring out rates for all commodities within a week.

The committee warned that it would resort to harsh means of agitations, including an indefinite shutdown of Dimapur, if its appeal for regulating prices goes unheeded.

The PAC has been running a campaign against illegal taxation since September 16 with support from tribal constituent units.

PAC convenor Vekhosayi Nyekha said all the volunteers manning the check gates were withdrawn on Friday but asserted that the fight against illegal taxation would continue.

Nyekha also informed that as demanded, a district price regulation committee would be formed within a week with members from the PAC to regulate price of commodities.

The committee also met transporters’ union during which the transporters shared the burden of “heavy taxations” from various quarters.

It was learnt that a six-wheeler truck carrying commodities from Guwahati till Khatkatti in Assam bordering Dimapur pays Rs 19,000 as tax but once it enters Dimapur, it inflates to Rs 40,000, Nyekha said.

The PAC during its campaign called ‘Operation Check Gate” also found that there were around nine unauthorised unions/organisations collecting between Rs 1300 to Rs 1500 per truck in check gates.

Nyekha urged the transporters to contact PAC officials with evidence including documents and video clippings if they are charged more than the prescribed rates.

He assured that the identity of the complainants would be kept confidential.

The PAC also slammed the legislators from Dimapur for remaining “mute spectator” on the issue.