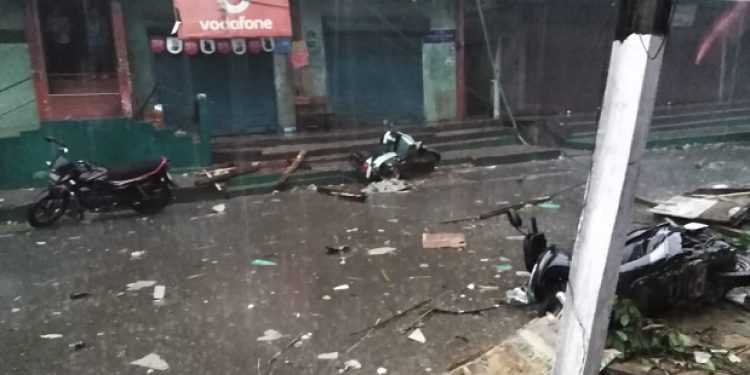 View of an area in Mizoram lashed by strong wind. Image - Northeast Now

Vairengte Joint Young Mizo Association (YMA) president H. Lalnunmawia said around 41 houses were destroyed in Vairengte, which is located in the northeastern most tip of Mizoram on the state’s border with Assam.

Of the 41 villages, 6 have been completely destroyed by the violent wind, which occurred at around 9 am on Monday.

Sources said that more than 8 dwelling houses were destroyed by the violent wind at Saiphai, a village adjacent to Saipum near Assam boundary.

Sources also said that at least 12 houses were damaged at Phainuam village and 2 at Vaitin village along the Mizoram-Manipur border.

Meanwhile, the C&RD blocks of Resubelpara and Bajengdoba in North Garo Hills (NGH) district of Meghalaya were also hit by a storm that hit the area in the early morning on Monday leading to many houses being damaged with some being completely blown away.

According to district officials, villages like Resubelpara, Sualmari and Jonglapara among others were hit in both Resubelpara and Bajengdoba blocks with officials concerned are now making an assessment of the damages caused by the storm.

People hit by the storm are currently being given shelter in various locations on a temporary basis with the administration working to ensure food and accommodation to all that have been affected.

On the other hand, windstorm and lightning claimed lives of three women in Manipur while more than a dozen people including students were injured on Monday morning.

Windstorm rendered several people homeless after their houses were destroyed.