Victims lead pledge for conservation of big cat in Guwahati 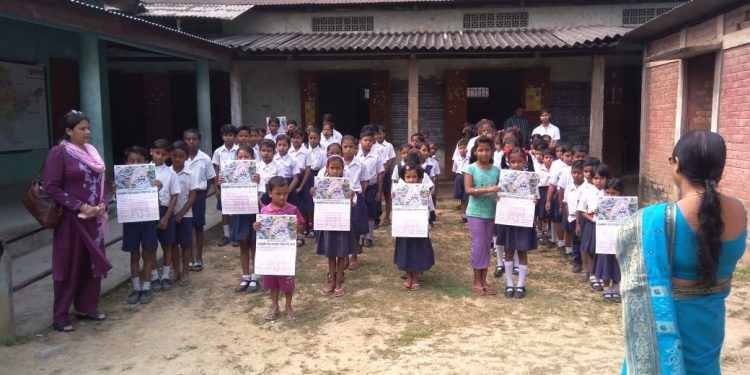 Children taking part at the event.

The Dhirenpara area in Guwahati has seen a number of incidents of human-leopard conflict since 2012. The most recent incident in the area took place on November 12, 2017.

A leopard—taking shelter in the Dhirenpara Sishu Vidyalaya premises– wounded five people as it tried to find its way through an irate mob. Of them, Anwar Ali who was seriously injured succumbed to his injuries in a hospital on November 16.

Exactly after a year, a prayer meeting was held in the school premises in memory of Anwar Ali. Anwar Ali’s widow and their six-year-old son Rahul were among the students and teachers who took a pledge to carry forward the campaign for human-animal co-existence.

On Friday, along with members and volunteers of Media for Wildlife Action—a group of city journalists founded under the “Living with Leopards” campaign—an initiative undertaken by journalist and conservationist Mubina Akhtar with support from WWF-India, they pledged to work for co-existence by ensuring safety of humans and survival of the species.

Human-animal conflict (HWC) occurs when humans or wildlife harm or threaten one another in the course of pursuing their needs. While in some cases humans threaten, attack, injure, or kill wildlife–in other cases the wildlife threatens, attacks, injures and kill humans or destroy their crops or livestock.

HWC also occurs when humans deliberately injure, abuse, or kill wildlife because of perceived or actual threats it may pose to their life, livestock and family. When people perceive wildlife as impairing their interests, the conflict may intensify as they may retaliate against individual animals or entire populations.

“HWC is rapidly becoming one of the most alarming threats to the survival of many wildlife species, including large and highly endangered animals such as tigers, leopards and elephants that are directly associated with the conflict. While it is important to empower local communities with the knowledge and field equipment for conflict prevention, to manage human–wildlife conflicts, it is important to change the perceptions of people experiencing the damage with adequate economic incentives as compensatory measures, so that they are ready and willing to tolerate damage. However, release of compensation continues to remain a hurdle in most cases that impacts conservation,” said Mubina Akhtar.

The widow of Anwar Ali who was present on the occasion vented her grievances against the authorities for not being able to compensate for even the loss of lives.

“After meeting Anwar Ali’s widow and son, we, from “Living with Leopards” initiative are constantly in touch with the forest department so that compensation for Anwar Ali’s wife is released at the earliest,” Akhtar said and added that the area where the incident happened is a densely populated area.

Fearing more fatal incidents and retaliatory action, we communicated with the school authorities and local people including the victim’s family and it was quite rewarding to interact with the community specially the younger generation who took great interest in conservation of our biodiversity including the big cats.”

The “Living with Leopards” initiative in the Kamrup district supported by WWF-India has been working on outreach and education towards reducing the crisis.

“This is a community-based programme through education and outreach on man-animal co-existence in the urban landscape of Guwahati. Our objective is to build capacity for addressing the problem and to follow a policy of co-existence by ensuring safety of humans and survival of the species,” she added.

Chandan Duarah of Asomiya Pratidin who was present on the occasion said, “Proper education among the masses with intense awareness campaigns for protection of the species is the key for a sustainable policy of co-existence. It is important to take into consideration the voices of the community while framing policies for result-oriented conservation approach.”

Mridul Bora from DDK, Guwahati and Nipa Kakoti of Amar Asom stressed on the need for public participation for securing local support and involvement needed to achieve conservation goals.

Assam has seen a spurt in human-leopard conflicts since the 90s. In the last few years the conflict has taken a turn for the worse with casualties on both sides.