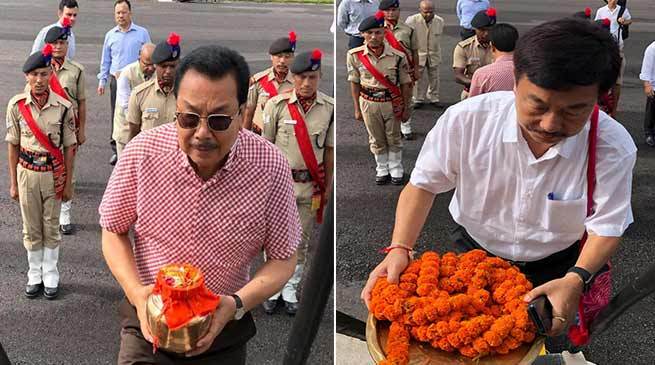 The ashes of former Prime Minister Atal Bihari Vajpayee, who passed away recently, were immersed as per customary rituals in Parasuramkund in eastern Arunachal on Friday, said Arunachal government sources.

En route to Parshuram Kund, the helicopter carrying the ashes made stopover at Pasighat Airport this morning and the ashes was displayed there for general public and party workers.

The BJP leaders of the district including district president Tamat Jonnom, East Siang district BJP in-charge Dunggoli Libang and others paid floral tribute to the late leader at Pasighat airport. Later, it was flown to Parshuram Kund and immersed at the holy site.

The pot containing ashes of the former prime minister was brought from Delhi to Itanagar on Thursday afternoon. It was brought to State BJP office in Itanagar for paying homage to the departed leader.

It was also taken to Dorjee Khandu Convention Center, where the State government organized a condolence meeting for paying last respect to late Bajpayee.