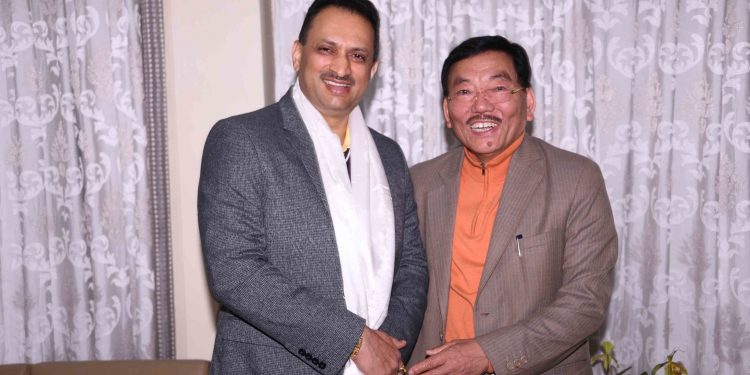 The Minister of State for Skill Development and Entrepreneurship Anant Kumar Hegde called on Sikkim Chief Minister Pawan Chamling at his official residence, Mintokgang on Monday.

He arrived at Gangtok on Sunday evening on his two-day long visit to Sikkim. The Minister also called on the Governor, Ganga Prasad at Raj Bhawan on Monday morning and had a brief talk.

Then the Minister visited the Government Fruit Preservation Factory at Singtam in East Sikkim. He was accompanied by the Secretary, C C Bhutia and Additional Secretary, Sunita Pradhan of Skill Development & Capacity Building, Government of Sikkim.

Managing Director, Pawan Awasthy shown him around the factory and explained how every product was made from organic products and packaged and manufactured. The Minister also interacted with staffs of the factory. The Minister also visited ITI at Rangpo in East Sikkim and had an interactive session with the students and faculties.