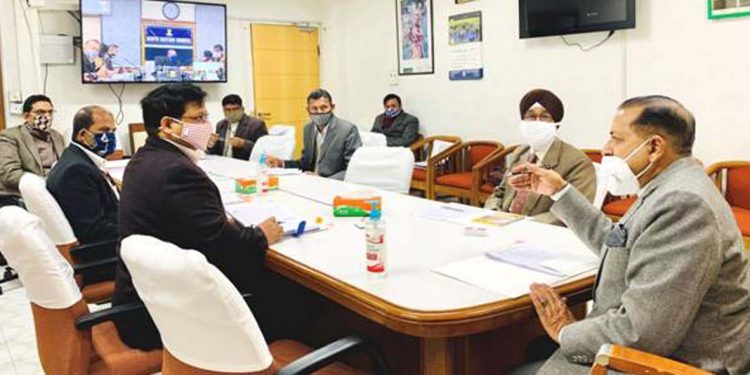 DoNER minister Jitendra Singh during a meeting in New Delhi on the plenary session of NEC.

Union home minister Amit Shah will attend the 69th plenary session of the North Eastern Council (NEC) to be held in Shillong on January 23-24, 2021.

The session will be held under the chairmanship of home minister Shah.

The meeting will be attended by the Union minister of state (independent charge) for the development of the North Eastern Region (DoNER) and the vice-chairman of NEC, Dr. Jitendra Singh.

Members of the NEC consisting of the Governors and chief ministers of the 8 Northeastern states, senior officials from the states and key ministries of the government of India are expected to be present on the occasion.

“DoNER minister Dr. Jitendra Singh on Tuesday held a meeting with senior officers of the DoNER ministry and NEC in New Delhi to review the preparedness and modalities for the 69th plenary session of NEC at Shillong,” the ministry of personnel, public grievances & pensions said in a statement.

During the two-day session, there will be presentations from the DoNER ministry, NEC, the state governments as well as the selected central ministries on various developmental initiatives and future plans for the Northeast region, the statement said.

The session is expected to deliberate on the progress of ongoing projects, confirmation of the proceedings of the 68th plenary meeting, outlays by central ministries in the Northeastern region and plans for the period beyond March 2021 during the term of the 15nth Finance Commission.