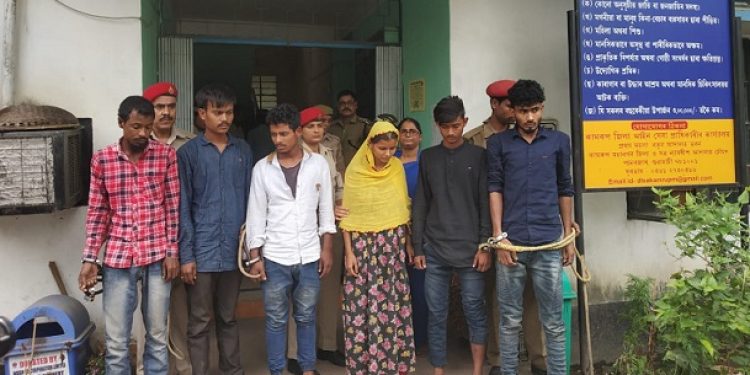 The court of Chief Judicial Magistrate, Kamrup (M), remanded 6 people, who were arrested in connection with the Ugratara Temple’s idol theft case, to 4-day police custody in Guwahati on Thursday.

Latashil police in the city have already started interrogating the thieves.

On Tuesday, a Goalgahat police team led by additional superintendent of police (ASP) Surjeet Singh Panesar arrested Adil Ali (21) of Tihu; Chand Hussain (18) of Batchar; Rahul Ali of Mukalmuwa (23) in Nalbari district and Mintu Rai (26) of Panjabri in Guwahati, and took all of them to Golaghat.

The Golaghat police also took the ashtadhatu idol of Ugratara Temple, which was recovered from a pond owned by Adil Hussain.

On Wednesday, Barama police were able to arrest one Samsul Ali in connection with the same case. At night on Wednesday, the police also arrested one more accused, who has been identified as Resma begum.

The city police produced all the accused in the court of the Chief Judicial Magistrate, Kamrup (M) district, on Thursday which remanded them to four-day custody of the city police.

Meanwhile, the managing committee of the Ugratara Temple along with a large number of devotees took the recovered ashtadhatu idol of the temple to Latashil Police Station.

After completing all formalities, the managing committee of the temple took it idol in their custody and brought back it to the temple campus.

A procession was also taken out from Latashil PS to the temple campus.

The idol was first kept on display in front of the temple so that the visitors can have a glimpse of it.

However, the temple authority informed that no date has been fixed yet to install the idol in the temple.

The temple authority stated that as damage has been caused to the idol, only after repair of the same the idol would be installed in the temple.