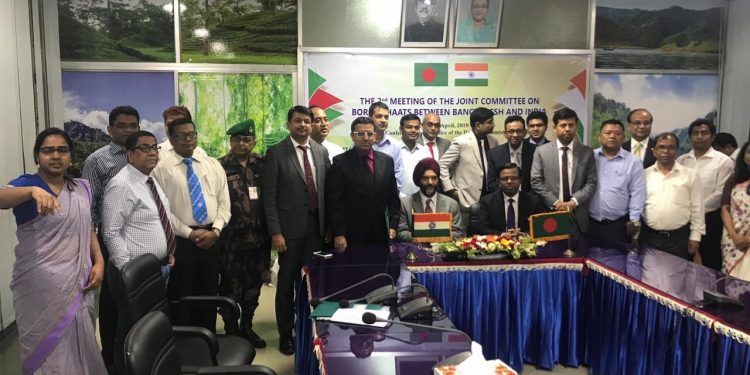 The Indian and Bangladesh delegation at the border haat meeting in Sylhet. Image Credit - Northeast Now

The Joint Committee on Border Haats between India and Bangladesh, during its meeting at Sylhet, Bangladesh, has decided to set up two more border haats in Tripura.

The border haats will be set up at Ghosh Khamar, Belonia sub-division and Belcherra in Khowai sub-division.

The Indian delegation was led by BS Bhalla, additional secretary, Ministry of Commerce, Government of India, and included representatives of border states of Assam, Meghalaya, Tripura and Mizoram.

Border haats are weekly markets constructed on zero line along the Indo-Bangla border. It boasts of a market shed with 40 to 50 vendors on each side.

People from both the countries residing within 5 kms of the border area can come and purchase their daily need items from the border haats.

India and Bangladesh inked an MoU in 2014 for setting up border haats which was revised in 2017. Two border haats are now operational in Tripura.

Six of them are under construction along the Indo-Bangla border and funds have been sanctioned for construction of additional six border haats.

Tripura, Assam and Meghalaya got two new border haats each. The two border haats operational in Tripura – Kamalasagar in Sepahijala district and Srinagar in South Tripura district. Both of them are abuzz with activity.

Funds have been sanctioned for two more border haats to come up at Ragna (Dharmanagar sub- division) and Moracherra (Kamalpur sub- division). The authorities are only waiting for Bangladesh to greenlight it which they are expected to do so by July 31 next.