Two Indo-Bangla border haats to be operational in Meghalaya

Bilateral meeting of DCs, DMs and SPs from border districts of Meghalaya and Bangladesh held in Shillong 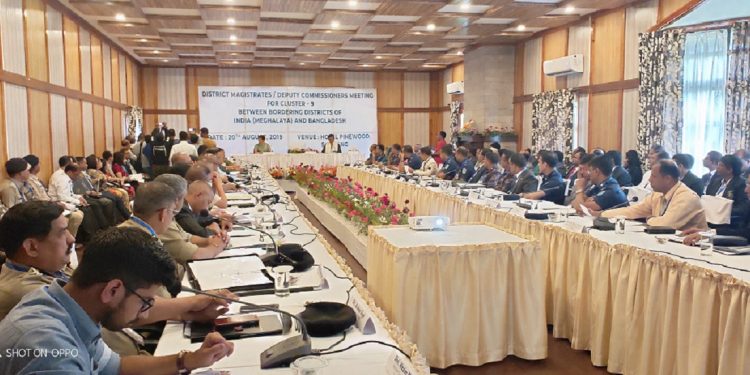 Two Indo-Bangla border haats in Meghalaya will become operational by next month.

This was informed by Meghalaya additional chief secretary, Rebecca V Suchiang at the bilateral meeting of deputy commissioners/district magistrates and superintendents of police from border districts of Meghalaya and Bangladesh in Shillong on Tuesday.

The Bangladeshi delegation which comprised 52 officials was led by team leader, Ahmad Kabir, who is the deputy commissioner of Jamalpur district.

Suchiang informed that two border haats at Bholaganj and Ryngku both in East Khasi Hills district of Meghalaya bordering Bangladesh, will become operational by September.

She also informed that another border haat at Nolikata in South West Khasi Hills district will become operational by December this year.

Suchiang also shared about the initiatives to set up border haats at Huroi in East Jaiñtia Hills district and Dalu in West Garo Hills district.

At present, the ICP at Dawki in West Jaiñtia Hills district is being constructed.

“This is the right forum for generating options based on consensus,” Suchiang said.

She also said meetings earlier have been very cordial and there were excellent decisions that had borne fruits.

“There were also decisions which were under status quo as long standing issues cannot be resolved overnight,” she added.

“There has been progress since the previous meeting held in Mymensing district,” she also said.

Besides issues related to setting of border haats, Suchiang said that mechanisms as how to expedite the repatriation of jailed Indians and Bangladeshis should be adopted.

On this, she suggested the BSF and BGB to come up with standard operating procedures in order to avoid delays, and come up with solid propositions that should be approved by governments of both the countries.