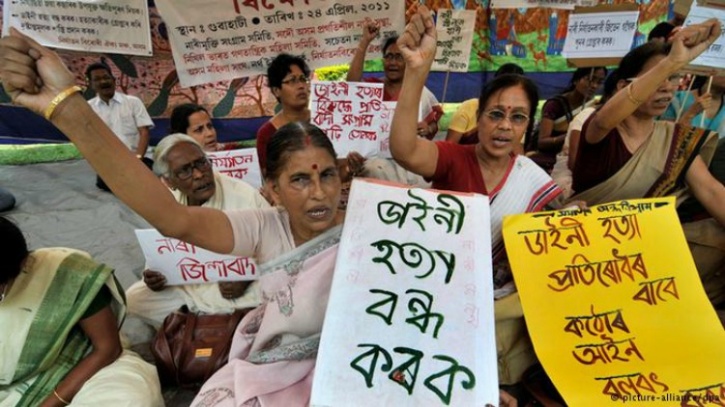 Two women of Hooloonguri tea estate under Deberapar police outpost in Mariani area in in Jorhat district were mercilessly beaten up by a group of tea workers branding the duo as witches.

The two, Maloti Bhumij and Rajmoni Bhumij, were rescued by police of the Deberapara outpost in the daybreak on Saturday.

Both the women are presently sheltered at the Mariani police station.

Police said that a case (No214/19) has been registered against three women of the Tekela Line of the tea garden, who had instigated the workers to assault them.

“The police at Deberapar are searching for the three who have been charged under sections 448, 352, 506 and 120B of the Indian Penal Code,” Mariani police station office-in-charge Tilok Borah said.

Borah said they have also been booked under section 7, under the new Assam Witch hunting Prohibition, Protection and Prevention Act of 2015, a first under Mariani police station.

The Assam Tea Tribes Students’ Association (ATTSA) has also filed a separate complaint to the police.
Locals said that the women, both in their 50s, were branded as witches when they were seen by other residents of Tekela Line returning home in a dishevelled state after midnight of Friday.

“When they were questioned they said that they had gone to collect firewood late in the evening as they did not want to be spotted by the management.  However, on seeing headlights at about 7.30 pm they had fled and hidden in a wooded area,” said a local.

“As it was a new moon night they had lost their bearings and had reached home now.  However, no one believed them on seeing their clothes muddied and torn,” he added.

Tea workers are allotted a fixed quantity of firewood by tea estate management and if found cutting trees or gathering firewood in the tea garden are liable to be fined Rs 5000.

The source said that as soon as the rumour spread a crowd of people gathered and from among the public, a member of the Village Defence Party informed the police at Deberapar, who rescued the duo.

Anti witch hunting activist Dibyajyoti Saikia, who was instrumental in getting  the Assam Witch Hunting Prohibition,  Protection and Prevention  Act,  2015 being passed by the then Tarun  Gogoi  led government said that he was happy that a section of this strong Act had been invoked.

“The Act came into force in October 2018 in Assam after the governor had given his assent that year but there is lack of legal awareness about the provisions of the Act, which is the strongest among all those states where such special anti Witch hunting Acts are in place.  This will send a message to the people,” he told Northeast Now on phone.

Saikia, founder of NGO Brothers, said that the home department should undertake extensive awareness programmes for its proper implementation.