The Trinamool Congress (TMC) has intensified its efforts to revive the party in Tripura. 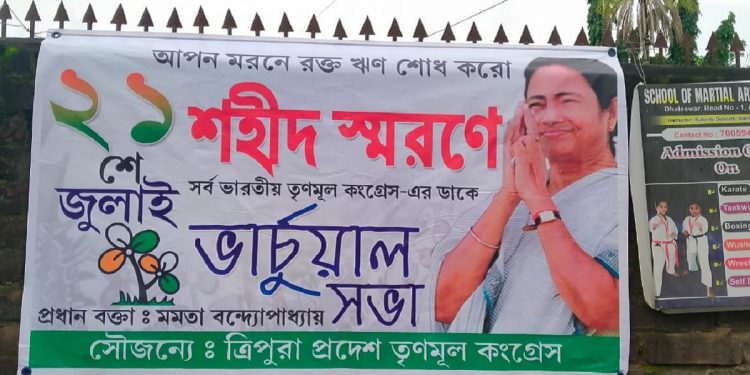 The Trinamool Congress (TMC) has intensified its efforts to revive the party in Tripura.

July 21 is being observed by the TMC, every year, as Swahid Diwas, where it “remembers the fallen party workers”.

This was informed exclusively to this correspondent by Tripura TMC president Ashish Lal Singh on Sunday.

Preparations are underway in Tripura, in full swing, for the virtual ceremony with hoardings, publicizing the event, being set up across the state.

Tripura TMC president Ashish Lal Singh informed this correspondent that giant screens are being installed in headquarters of four districts for the event.

Singh said: “We have installed giant screens in four district headquarters: two in Agartala city and one each in Dharmanagar, Ambassa and Udaipur for the TMC workers and general public.”

“There is a lot of enthusiasm among the party workers and general public for the event, as this will be for the first time that Mamata Banerjee will be addressing them,” added Tripura TMC president Ashish Lal Singh.

The event will begin at 2pm and will continue till 4 in the evening on Wednesday, the Tripura TMC president informed.

Ashish Lal Singh further said that the TMC is working to make its base strong in Tripura ahead of the Assembly elections in the State.

He said that thousands of ground level workers have joined the TMC after quitting the BJP and the CPI-M in the last couple of months in Tripura.

Singh said: “We are currently preparing ground by making out grassroot strong for the Assembly elections in Tripura in 2023.”