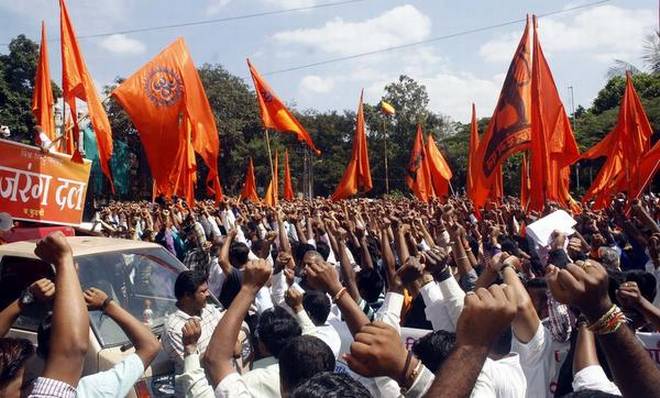 With the Bharatiya Janata Party (BJP) wresting power for the first time in Left Front dominated Tripura in the recently concluded Assembly elections, the saffron brigade has started to show its true colours.

The Vishwa Hindu Parishad (VHP), the radical organization on Sunday has demanded a ban on cow slaughter in the north-eastern state.

It also threatened to launch an agitation if such a ban is not imposed in Tripura soon.

A group of VHP activists, accompanied by Bajrang Dal workers, staged a protest at South Joynagar in Tripura West district, which shares international border with Bangladesh.

The VHP has alleged that cow slaughtering in Tripura is conducted mainly a section of illegal Bangladeshi migrants who have sneaked into Tripura during the last 25 years long Left Front rule in the State.

The protest was withdrawn after the police took control of the situation. However, but no complaint was lodged.

Later, as an immediate fallout, a group of minority community people assembled in front of local BJP legislator, Surajit Datta’s residence at Ramnagar and raised the issue protesting against the demand raised by the VHP volunteers.

Datta had promised to look into the issue and disbursed the assembled crowd.

Notably, after BJP formed the first government in Tripura last month in alliance with Indigenous People’s Front of Tripura (IPFT), the party’s state in-charge, Sunil Deodhar had proclaimed that the Biplab Kumar Deb led government would not implement any ban on beef consumption as a large percentage of north-eastern people consume beef as part of their regular food habit.

Even the previous Left Front government had opposed implementation of the Centre’s cattle trade and slaughter rules, as it was against the interest of a large section of people.