Tripura requests Bangladesh for piece of land for MBB airport 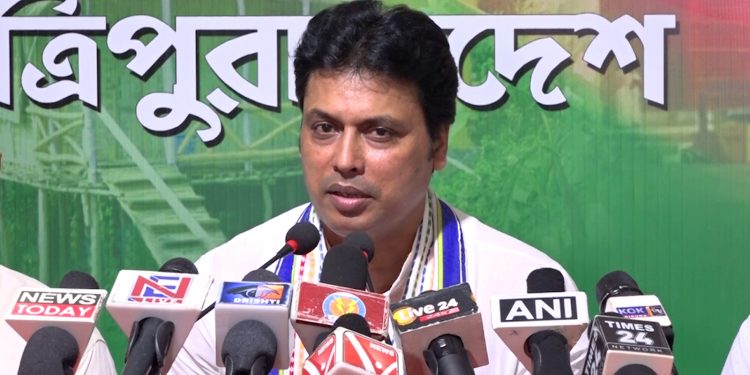 Tripura CM Biplab Kumar Deb on Tuesday said that the state government has sent a proposal to Bangladesh government for allotting land to further extend the runway of Maharaja Bir Bikram (MBB) Airport located just on the border.

“The airport here in Tripura is located just on the border and so the passengers of Bangladesh can also take advantage of it,” the CM said while addressing the media in Agartala.

“But for the landing of big flights we need to expand the runway,” he further said.

“I have sent a proposal to the union government to discuss the matter with Bangladesh so that that nation give us land for extension of the runway,” further added the CM.

Deb also informed that they already have all the infrastructure required.

The chief minister further said that it will be a win-win situation for both nations.

“A lot of Bangladeshi people visit Tripura and go to other states of India via Agartala every year. They can benefit from MBB Airport if we can build a long runway,” said the CM.

“We have requested for a piece of land, less than 1 km inside the neighbouring border, to build an extended runway. This project will be beneficial to people from both nations,” added Deb.

As per reports, a technical proposal from the government in this regard is still awaited in Bangladesh.

A verbal proposal was made earlier this year in March during a meeting of foreign ministries of both countries in New Delhi.

For the expansion and modernisation of the MBB airport to international standards by providing world-class facilities with the Airports Authority of India (AAI) has undertaken a Rs 438 crore project.

Once the project is complete, flights between Agartala and Dhaka as well as other Bangladeshi cities like Chittagong and Sylhet would start operating.