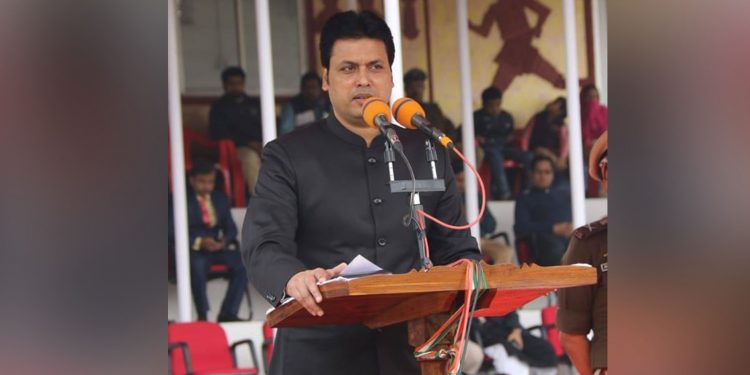 The Tripura police are working freely and without any political pressure, claimed Chief Minister Biplab Deb on Thursday.

Deb, who also holds home department portfolio, was speaking after inaugurating the police week in Agartala.

“Earlier, the Tripura police was controlled by the political parties. But the scenario has changed now,” Deb said.

“In the last 20 months, 987 cases have been registered in various police stations across the state,” he added.

“So far the police have arrested 4992 persons in connection to these case. The law and order situation in the state has improved than before,” Deb said.

“Today anyone can lodge a complaint at the police station. This was not possible before,” he reiterated.

The CM further announced that the government will recruit 1100 Gram Sevaks for bridging the gap between the police and the public.

“Our government is committed to delivering good governance and a better law and order situation in the state,” Deb reiterated.

He further informed that the present strength of Tripura police is nearly 24000.

He also appealed to the police personnel to donate blood every three months.