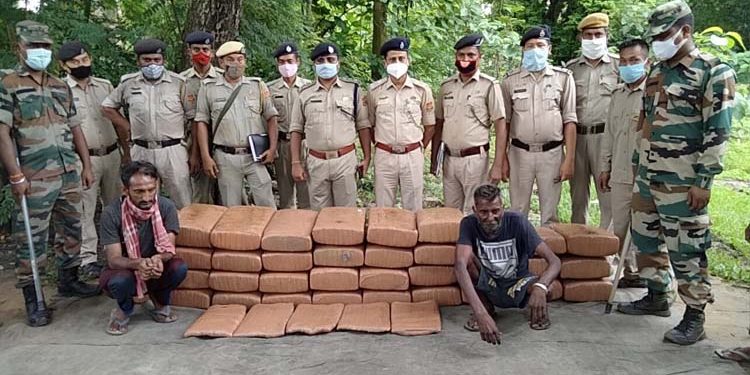 The cannabis seized in Tripura and the two nabbed persons.

Tripura Police, traffic personnel and the officials of the 84th Battalion of BSF on Saturday seized 656 kg of dry cannabis worth Rs 35 lakh from two separate places of Tripura.

“A six-wheeler truck, carrying dry cannabis worth over Rs 20 lakh, was seized by the Teliamura traffic police in the wee hours of Saturday morning. The consignment of cannabis was seized at Hawaibari ‘Naka’ checkpoint area under Teliamura police station,” said sources.

As usual, the traffic police personnel of Teliamura were on duty at the checkpoint area of Hawaibari under the Teliamura police station at around 7.30 am on Saturday to check the vehicles passing through the road.

At that time, a six-wheeler truck, bearing registration No PB13AR-6245 was proceeding towards Teliamura from Agartala.

The Teliamura traffic police became suspicious when they saw the vehicle increased its speed as soon as it reached the checkpoint area of Hawaibari in Teliamura.

Later, the traffic police conducted a search of the truck and recovered 42 packets of 360 kg illegal dry cannabis from a secret store created in the truck.

“The market value of the cannabis would be around Rs 20 lakh,” a police official said.

Police said the truck was on its way to Punjab for smuggling the cannabis.

After the detection of the cannabis in the truck, Khowai district superintendent of police (traffic) Bikramjit Shukla Das rushed to the spot along with a large police force from Teliamura police station.

In another joint operation by BSF and Tripura Police, about 296 kg of dry cannabis were recovered.

The consignment of cannabis was recovered in a five-hour operation from 11 am-3 pm on Saturday.

The market value of the recovered cannabis would be about Rs 15 lakh.

The consignment of cannabis was recovered from the house of one Manoranjan Sarkar at Tilla area in Kalshimura gram panchayat under Kalamchaura police station.

The consignment was seized on the basis of secret information received by the 74th Battalion of BSF.

A total of 8 blue drums were recovered during the operation.

However, the police-BSF team could not nab Manoranjan Sarkar, who is currently a fugitive.