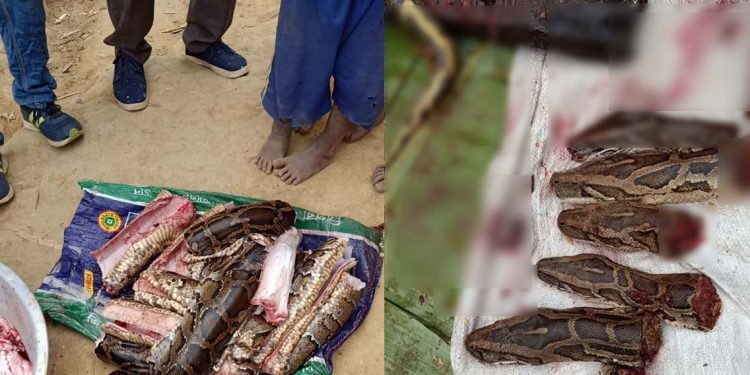 As per reports, the three tribals – Asi Chandra Reang, Rakanjoy Reang and Purbachay Reang – caught the pythons after finding them while doing Jhum cultivation.

The trio then brought the pythons back to their village and slaughtered them publicly in the local market.

The pythons were decapitated and cut into pieces in the local market and the local tribals later consumed their meat.

A video clip and photographs of the pythons being slaughtered publicly went viral on social media last week.

The Forest Department filed an FIR against the trio in accordance with the Wildlife (Protection) Act, 1972.

The three persons were arrested on Wednesday and produced before a local court on Thursday.

In the month of July last year, a 47-year-old captive elephant named Laxmi from Assam, which had an unnatural death, was chopped into pieces, and the meat was consumed by the villagers close to Kanhmun Forest Range in Mizoram.

The pictures of the dead elephant’s sliced meat had gone viral all over the internet.

According to many wildlife activists and NGOs, the illegal practice of destroying the forest and wildlife is going on for years but no strict action/awareness has yet been taken.