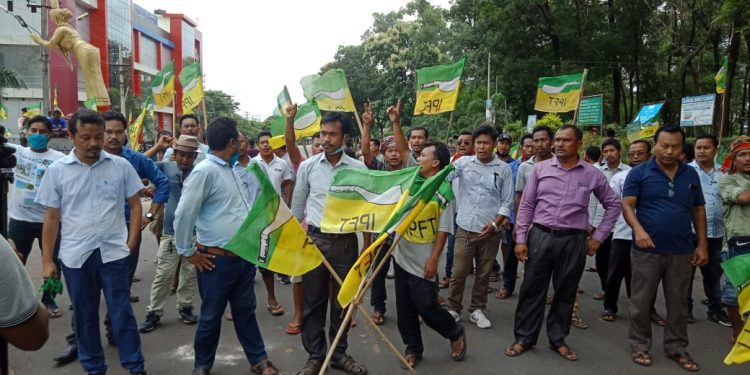 A 24-hour bandh called by Indigenous People’s Front of Tripura (IPFT) in Khumulung of Tripura began from Thursday morning.

Khumulung is the headquarters of Tripura Tribal Areas Autonomous District Council (TTAADC) and it is nearly 25 kilometer from Agartala.

IPFT’a assistant general secretary Mangal Debbarma said the 24 hours strike has started from 6 am and it will end at 6 am on Friday.

Few days back there was a clash between BJP and IPFT workers at Khumulung.

It has alleged that BJP president Manik Saha was attacked on that day.

Pradip Debbarma, an IPFT cadre was arrested by police and police imposed non-bailable charges against him.

IPFT has launched protest against this action of the police.

Mangal Debbarma said Pradip Debbarma did not know anything and that he is innocent.

But police did not pay any heed to their demand.

Disgruntled with the attitude of the police, the IPFT called the 24 hours strike at Khumulung.

The IPFT workers blocked all the entry points of Khumulung from Thursday morning.

Nobody could enter into the peripheries of ADC headquarter.

Security personnel were deployed to handle any kind of law and order situation.

Khumlung has been totally shutdown due to the 24 hours strike.

No school, college, shops and markets were opened on Thursday.

Normal life has been paralyzed.

IPFT workers set tyres on fire on the road and closed the roads.

It is notable that, IPFT is the ally partner of BJP in the State.

But since couple of days, BJP and IPFT workers are engaged in clash in different parts of the State.

One IPFT leader was murdered at Gandachara area.

It is also notable that, ADC election is pending in Tripura due to coronavirus pandemic situation.

IPFT is the main political party in the ADC areas.

They won eight Assembly seats from the tribal reserve 20 seats in the State in last elections.