Body of a woman recovered from a hotel room at Tripura capital Agartala.

The deceased has been identified as Jaya Majumder.

She was assumed to be around 37 years old.

Her body was found at Star Hotel, located at Maharajganj Bazar of Agartala.

The hotel employee recovered her body from the room. 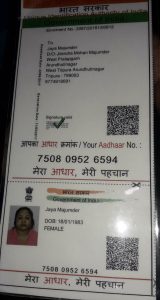 The document which she was deposited in the hotel, from that it has came to know that she was a resident of west pratapgarh of Arundhuti Nagar of Agartala.

The hotel staff recovered her body which was hangin from the hotel room ceiling.

The hotel staff told that her door was locked from inside since Sunday noon.

At night they called her several times but there was no response from inside.

They then broke the lock of the door and found Jaya Majumder hanging from the ceiling.

The hotel staff then called the police.

Her body is now kept at GB hospital morgue.

While police search the room found a driving license of Jaya Majumder where her address mentions as Guwahati.

Police also suspect that may be she was presently staying at Guwahati, because as per her Aadhaar card Jaya Majumder was a resident of Arundhati Nagar in Agartala.