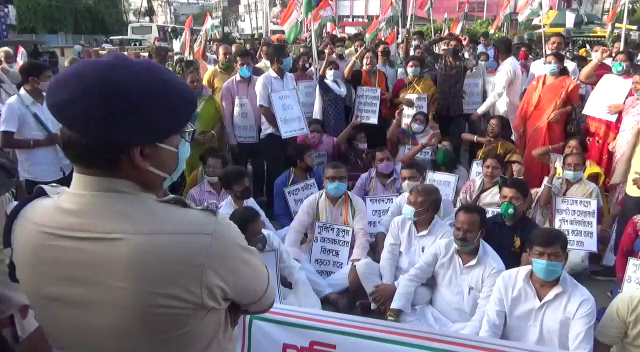 Tripura Congress on Monday evening launched a massive protest programme against the police in Agartala.

The congress leaders warned that they will file a criminal case against sub-divisional police officer (SDPO) Shashvat Kumar.

It is notable that, on Sunday Tripura observed full lockdown across the State.

Congress on Monday launched protest programme against the arrest of Narayan Datta.

He said, police has no right to abuse people or harass people.

He alleged that, SDPO is creating problem.

Pijush Biswas said, “Yesterday Narayan Dutta, Sadar Jila Congress president was arrested by police when he went out of home. The SDPO is suffering from intolerance. He is thinking that as he is an IPS Officer, thus he can do anything, but that is not the reality. Many officers were punished for their such attitudes.”