Tripura Congress hits back at BJP-IPFT; demands roll back of transport fare hike 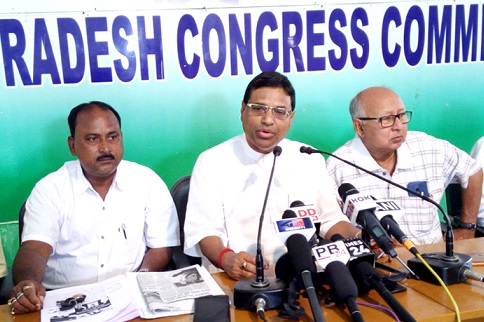 The Tripura Pradesh Congress Committee on Friday lashed back at the ruling Bharatiya Janata Party-Indigenous People’s Front of Tripura (BJP-IPFT) combine over hike in transport fare demanding roll back.

Addressing media persons at Congress Bhawan in Agartala on Friday afternoon, senior Congress leader Gopal Chandra Roy came down heavily on the Cabinet decision to hike transport fare by 20 per cent above existing rates of all passenger vehicles.

Roy said the 20 per cent hike is ‘highest ever in Tripura after independence’ and that it would be a huge burden on common people.

Terming the decision as ‘anti-people’ by the BJP-IPFT coalition government, the Congress demanded immediate rollback of the fare revision.

On Thursday, Tripura Cabinet has hiked the fare of motor vehicles up to 20 per cent keeping in tune with the steep rise in petroleum products, specially petrol and diesel.

The veteran Congress leader further said that since the NDA government led by Narendra Modi came into power, the prices of fuel reached at its highest in the country and within three months rule of BJP in Tripura, it has also hiked the sales tax of diesel at 16.5 per cent and petrol at 24 per cent.

Terming the Cabinet decision as ‘autocratic and unprecedented’, Roy further added that since March 3 early this year the people of Tripura are being denied of their fundamental rights and alleged that the BJP-IPFT government betrayed the people of the State.