Every effort will be made by our government to provide all the facilities available to the martyr Bijoy Debbarma’s family: Biplab Kumar Deb 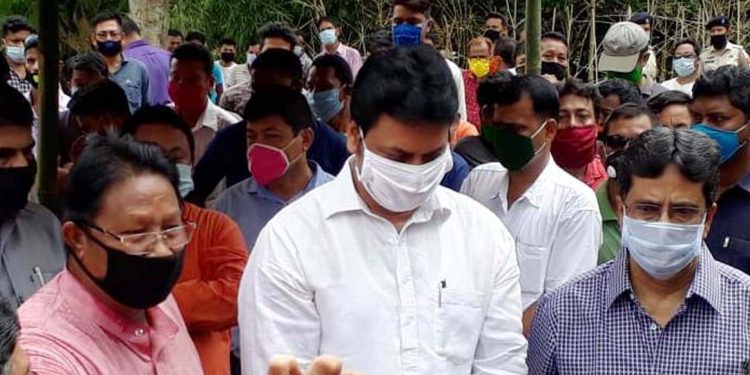 Tripura chief minister Biplab Kumar Deb handed over a cheque of Rs 5 lakh to the next kin of Army jawan Bijoy Debbarma, who achieved martyrdom while discharging duties along the Indo-China border.

The Tripura chief minister went to the house of the martyred jawan at Goliraibari under the Sepahijala district in Tripura on Sunday.

Deb paid homage to the brave jawan and saluted his sacrifices to the nation.

Speaking on the occasion, the Tripura chief minister said the state government would make all efforts to get all facilities from the Government of India to help Bijoy’s family.

“Every effort will be made by our government to provide all the facilities available to the martyr Bijoy Debbarma’s family,” the chief minister said.

Debbarma was posted as a havildar at an advanced position in Arunachal Pradesh along the Indo- China border.

On May 22, he was critically wounded in a sudden landslide in the snow-clad mountain and succumbed to his injuries on June 3.

His body was brought home by an Indian Air Force flight on Friday night.

In the presence of senior Army officers, Tripura Police, and state government officials, rich tributes were paid to the martyred jawan at Litchu Bagan in Agartala on Saturday.

He was later cremated in his native village, Guliraibari under the Bisramgunj police station.

The chief minister tweeted: “Lt. Bijoy Debbarma is a pride of our state.”

“I salute his sacrifice, pay homage to brave martyr of Indian Army, Bijoy Debbarma and have condolences to his family in this hour of grief,” he added.