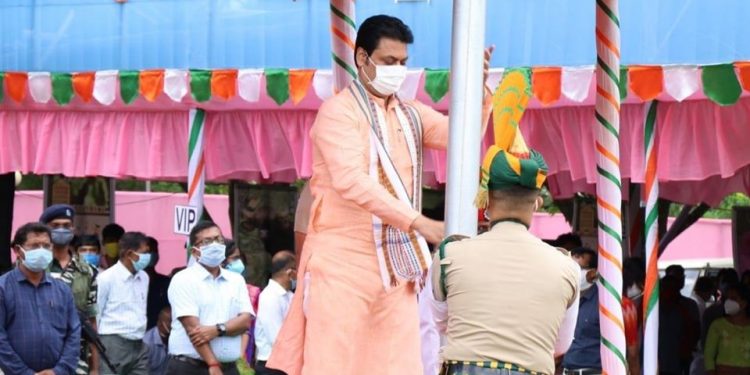 Along with the entire country, Tripura also on Saturday observed 74th Independence Day.

Chief minister Biplab Deb on this occasion unfurled the national flag at Assam Rifle’s ground and addressed the people.

Law minister Ratan Lal Nath was present at Gandhighat, where he paid tributes to the national heroes.

He also went to Post Chowmuhani where he paid his floral tribute to ‘Bijoy Stambha’.

The national flag was hoisted all the government offices and schools and government institutions.

Independence Day is observed with great pleasures across the State.

As COVID-19 pandemic situation is going on and safety measures are imposed everywhere so all programmes have been organized under maintaining the protocol.

The National Flag was hoisted at every political party offices.

At Assam Rifles Ground after hoisting the national flag, the chief minister in his speech described what his government is doing for the betterment of this State and people.

He told about the State Government’s new plans and proposals.

The chief minister claimed in every parameter Tripura is developing.