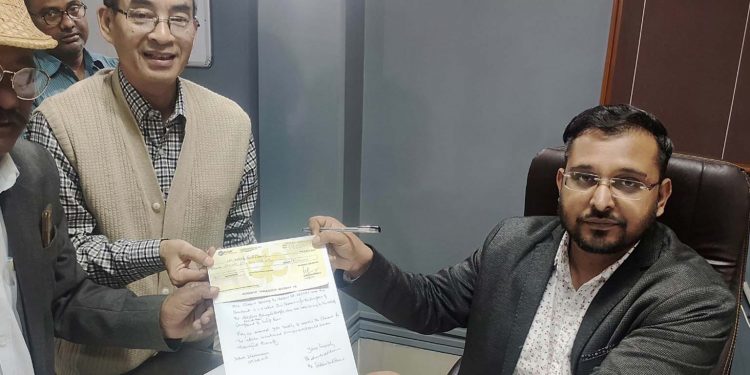 TIPRA delegation while handing over the cheque to Kanchanpur DM. Image: Facebook

A delegation of The Indigenous Progressive Regional Alliance (TIPRA), on Friday, handed over a cheque of Rs 1,50,000 to North Tripura district magistrate.

The amount was donated as a compensation to the Bengali families who were affected during the clashes between Bru tribe members and Hindu Bengalis in Kanchanpur subdivision on December 10.

Protesters reportedly threw stones at traders in the marketplace and vandalised shops.

“Today my team of TIPRA went and handed over a cheque of Rs 1,50,000 to the DM of North Tripura,” TIPRA founder and royal scion of Tripura Pradyot Debbarma wrote in a Facebook post.

“I had also previously condemned violence against the Bengalis at the aftermath of the CAA protests and this amount has to be given to the shopowner whose the establishment got ransacked in Ananda Bazaar by miscreants,” he added.

To speak for my Tiprasa people does not mean you are required to hate anybody,” he added.

“To say PuilaJatiUloParty does not mean you hate any other community – it means to put your people’s interest ahead of politics,” he reiterated.

“Will also speak for the rehabilitation of the Bengali families who have become landless in Kanchanpur,” Debbarman added.

“And all those who shout communal to me and try to provoke us- all I can say is the more you attack me the bigger/stronger I become,” he added.

Clashed broke out on December 10, 2019, in Kanchanpur between the Bru refugees and members of the Reang tribe.

In Ananda Bazaar area, several shops owned by members of the Bengali community were also vandalised.

At least 90 Bengali families had to take refuge in relief camps later.